Childe Cycle - Bridging the Past and the Future 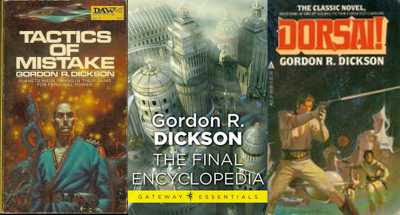 One of the biggest contributors to my development of reading tastes was my college hostel library. Here is where I picked up my first Asimov; here is where I picked up my first Herbert; here is where I picked my first Dickson. There was just one book of Gordon Dickson though: ‘Tactics of Mistake’. I found the book quite fascinating: the story flowed like a game of chess as the hero Cletus Graham formulates his theories on war and goes about executing it. In some ways, the book was like seeing Sun Tzu’s art of war in action. Of course the author has his own theories which I might take liberty to say I found as ingenious and logically sound as Sun Tzu’s. Then I did not find another book by this author for close to thirteen years till I ran into a fellow science fiction fan, who mentioned this author as one of his favorites. The same person was kind enough to lend me the rest of the books in this series known as ‘Dorsai’ series or ‘Childe Cycle'.

The core premise of this series is development of splinter cultures. It is based on the idea that if groups of humans are isolated from each other, they might evolve to be different from each other. In the current world, that is closely integrated, it may not be possible. But if humans spread across the universe, people on far away planets may develop cultures completely different from each other. In some ways it is a reflection of what happened in our own world itself: what we call clash of civilizations. But in fiction, the author has the liberty to make the differences much more pronounced than in the real world. Here the author has created three civilizations: the Exotics, the Dorsai and the Friendlies. In some ways, the conflict in the series has an allegorical significance, portraying the conflict between three human traits of philosophy, courage and faith. The Exotics are philosophers, who master the powers of the mind and go on to develop psychic powers. The Dorsai are a race of mercenary warriors, who have mastered the art of war and sell themselves out to anyone who can pay for their services. The Friendlies are the Jihadi warriors, the crusaders who fight relentlessly, not even caring for their lives, to defend their faith.

The series had a real ambitious vision: to trace the history of human race starting from the fourteenth century going all the way to twenty fourth century. Though the books are part of a series, each book is so different and almost feels as if it belongs to a different genre. The most popular books in the series are ‘Dorsai’ and ‘Tactics of Mistake’. Both novels are hardcore military strategy novels that involve the Dorsai. Due to that, the series if often called the ‘Dorsai Series’. The author however chooses to call it Childe Cycle, inspired by a poem by Robert Browning, “Childe Roland to the Dark Tower Came”. Incidentally the same poem has inspired Stephen King’s Dark Tower Series as well. However the historic books in the series that would have made the connection evident were never written. The other books in the series focus on the exotics and friendlies. As expected these books are more philosophical in nature and would appeal to the deeper thinkers.

The book ‘Necromancer’ is both mystical and philosophical, at times reading more like urban fantasy than science fiction. It lays out the genesis of the splinter cultures.  ‘Soldier Ask Not’ is an award winning short story that comes with a strong message about the dangers of harboring prejudices. ‘The Final Encyclopedia’ is more a coming of age novel that follows the life of the hero Hal Mayne. ‘The Chantry Guild’ brings to head a conflict of opposing philosophies – that of progress versus conservatism.  The hero Hal Maybe represents progress while the primary antagonist Bleys Ahren represents the forces of conservatism. Rather than portraying this as a personal conflict, it comes out a logical face off between opposing concepts. The author tries to show entire human society as a single organism that is experimenting with itself by developing these two opposing concepts over ten centuries and bringing them head on against each other. It kind of resonates with Karl Marx’s concept of historic necessity and Leo Tolstoy’s concept of natural flow of history.

Each book is in some ways complete in itself and can be read as a standalone. But the series as a whole has a broader undercurrent that goes beyond the individual stories. However the series feels incomplete without the last book and the three historic books that the author had planned. It is very sad that such a magnificent work embodying such a grand vision could not be completed. Some others might take it up and complete it. But one can never sure how much the new author can capture the spirit of the original work.

The series does have a few weaknesses as well. The idea of showing development of society through the development of an individual is interesting. However the mixing up of concepts of reincarnation, traveling across time and one person’s spirit animating another’s body does not work out too well. It leaves the reader a bit incredulous and unconvinced. Instead I feel author could have just stuck to good old reincarnation and shown how the hero evolved in each birth. The other aspect that kind of spoilt the reading experience is the variation of pace across the series. Whereas the two core ‘Dorsai’ books are fast paced, the Necromancer is medium paced while the last two are slow paced. So if someone builds his expectations based on ‘Dorsai’ and ‘Tactics of Mistake’, ‘The Final Encyclopedia’ and ‘The Chantry Guild’ may seem a bit disappointing.  Then there is of course the fact that series is not complete as well.

In terms of technological aspects, the author just describes enough technology to make the reader feel the story is set in the future. But technology is never the focus. However the Final Encyclopedia is an interesting technological construct. It is a machine that collates all the knowledge in the world and answers people’s questions like the mythical Oracle. Today it might not seem very innovative but one must remember that the series was written in the days before internet and quantum computing. The rest of the things are the usual hyper drive for space travel, nuclear powered weapons etc.

By now people may have realized I am more partial to futuristic sociological kind of science fiction than the hard core technology based ones. This is one more of this kind that I would highly recommend. This is a much easier read compared to Dune Series and has a much stronger human element compared to the Foundation series. It is also easier to relate to being set closer to current times. The fact that the story dates back from historic times would have been another strong point in its favor if those books had also been written.
Email Post
Labels: Science Fiction Series