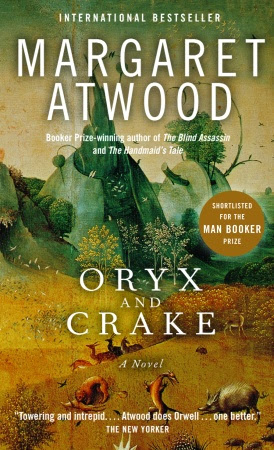 This series was to have ended last week but for the generosity of India's leading literary blogger Umashankar Pandey who has been kind enough to write a guest post for this series. For those who do not know him, he is an erudite person with eclectic tastes in reading. He is one of the very few persons who write genuine literary fiction on blogs. His blog 'One Grain Amongst the Storm' has been recognized as India's best fiction blog. Though serious literature is his primary area of interest, he retains some fondness for science fiction and fantasy as well. So it is only appropriate to have him tell us a about a science fiction series, which seeks to achieve serious literary acclaim as well.

I would like to begin this post on this exquisite Science Fiction blog with a caveat. Margaret Atwood, the redoubtable author of Oryx and Crake, refuses to tag her apocalyptic work as ‘science fiction’. In her own words, “I like there to be some resemblance between what is promised on the outside and what you get on the inside, and if it says ‘science fiction,’ I want there to be something that doesn’t already exist.” Apart from establishing her view on the genre in question, it also tells us what to expect in ‘speculative fiction’ –things that already, firmly exist in a world close to us. This is a story, therefore, of sciences and emotions that already exist and have managed to wipe out humanity save one man, a fact that we learn at the outset.

The story is set in not too distant a future but ‘nobody nowhere knows what time it is.’ Snowman, the intensely human protagonist, who stands in sharp contrast with an artificial race, who wraps himself in a dirty bed sheet and sleeps in a tree, nurses bug bites and scabs mindful of blood poisoning, scans the ground below for lurking wildlife before descending, refuses to let go off his dead watch that he keeps checking now and then, a reminder of the times gone by. He also has half a sunglass, better than nothing, six empty beer bottles and a half-bottle of Scotch. He wishes it all were a bad, bad dream.

Once upon a time though, Snowman wasn’t Snowman. Instead he was Jimmy. He was a good boy then. Calamities of the past leading to the devastation are resurrected in a series of flashbacks beginning from Jimmy’s troubled childhood. The society was as ever divided between the haves and have-nots, the uber class and the plebeians, the compounds and pleeblands. The compounds were the gated, fiercely guarded societies where the top brains and the rich lived. Controlled by mega corporations, they vied with each other in biogenetic research and poached frequently for talents. Journey among compounds was undertaken in sealed bullet trains. Outside were the wild, untamed jungles of humanity, rife with crime, diseases, drugs, sex, poverty, rebels and naturalists. CorpSeCorps, the intelligence and security arm of the commercial powers policed with an iron fist.

Jimmy’s parents were biotechnologists in OrganInc Farms, an organ harvesting outfit. They had developed pigoons, a ‘multiorganifer’ species from pigs using genetic splicing techniques, hosting multiple human organs. Before long, his mother revolted at the excesses being committed and vanished into the pleeblands to join the rebels. His father moved to a new compound controlled by HelthWyzer who were developing artificial skin that never aged. This was where Jimmy run into Glenn, aka Crake, in school. Together they played weird online videogames, notably Extinctathon, and visited pornography sites. This was where they first set eyes upon Oryx, a small girl forced into human trafficking and child pornography, somewhere in the seedy nooks of Far East Asia.

Crake, the prodigious scholar, was handpicked by EduCompounds at the Student Auction after graduation. Jimmy, forever the brooding laggard, managed to join Martha Graham, a rundown facility for those with artistic leanings and potentially, a bleak future. Jimmy was weaving his way through life aimless and dejected, copywriting and cooking false literature for spurious products, sleeping with married women till Crake rediscovered and offered him a position at Paradice, where he was in charge of a project for developing designer offspring for the super rich but was developing an alternate humanlike race on the sly. The ‘Crakers’ as they come to be known as, had been genetically purged of artistic ethos, love, hatred, jealousy and sexual possessiveness. They had flawless, sculpted bodies, vividly coloured skins, green, glowing eyes, insect repelling scent. They wandered nude but unlike humans, sex was not a perennial obsession with them. The urge would visit them seasonally and selectively and they would perform elaborate mating rituals in groups. They would mark their territory by urinating at the periphery, and could digest herbs and grass like cattle. Useful genes were picked from a plethora of animals and spliced into the DNA of this new race.

Jimmy was instilled next-in-command at Paradice and was privy to the secret. He also met Oryx for the first time in person there, whom Crake had managed to dig out and employ as a teacher to the ‘Crakers’. Jimmy and Oryx had a secret affair and at least Jimmy was desperately in love with her. Meanwhile, Crake was also propagating BlyssPluss, a wildly aphrodisiac pill and a severe contraceptive. Jimmy’s job was to glamorise the product literature, knowing little it will turn out to be a fatal Trojan horse.

In between his reminiscences, Snowman leaves the Crakers behind in the zoological park by the seashore to revisit the Paradice compound to grab a few last things that would prolong his existence. We learn how before humans were wiped out, the rebels and naturalists among them had raided the compounds and managed to set free bio-genetic monstrosities like pigoons and wolvogs. Ironically, those very creatures are now the greatest enemies of the last sample of their own creator.

One of the epigraphs of Oryx and Crake has been taken from Jonathan Swift’s Gulliver’s Travels:
‘I could perhaps like others have astonished you with strange improbable tales; but I rather chose to relate plain matter of fact in the simplest manner and style; because my principal design was to inform you, and not to amuse you.’
It is a clear and early mark of what the author has set out to achieve with this work. She intends to ‘inform’ and not to ‘amuse’, citing deadly offshoots of cutting edge technologies mixed with bottomless corporate greed and where it could lead the race. She intends to warn against the sinister pursuit of riches and agelessness, violations of Nature using potent bio-technological advances.  Her message may seem futuristic and fantastic but is clear as daylight, ‘some line has been crossed, some boundary transgressed. How much is too much, how far is too far?’

And thus, Oryx and Crake is not a mere fantasy -Gothic, Dystopian, allegorical or pertaining to ‘Science Fiction’, set in a galaxy far, far away, in a time light years from today. It is a reminder to the humans of whither they may be headed a few revolutions of the earth away.

Margaret Atwood has continued the spellbinding saga in The Year of Flood and MaddAddam. As we proceed further into the trilogy, we discover that Snowman is not alone after all. However, the author’s vision doesn’t change down the road, nor does the stance of her pulpit, or her grip on alternate realism. In the end, regardless of the genre the series is classified in, it remains an ingenious mix of science and satire, cautionary and literary fiction.

Watch out this space next Tuesday for the start of a new series.
Email Post
Labels: Science Fiction Series