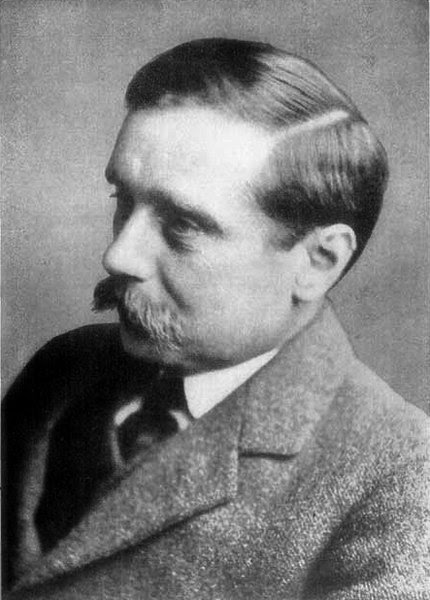 If Hugo is the father of Science Fiction, H.G.Wells is the grandfather of science fiction. He has dealt with almost every major science fiction theme – time travel, genetic engineering, space travel and aliens to name a few. He is brilliant in his craft but to be honest I find his works too dark and depressing. So despite being a hardcore science fiction buff I have not read as much of him as I may have liked to. However I must admit his ideas are so revolutionary and some of them can seem visionary even today.

I found the general atmosphere in all the three works of his I read – Time Machine, Island of Dr. Moreau and War of the Worlds - kind of like a typical Gothic horror. Of course this kind of atmosphere holds a strange fascination like the hypnotic glance of a vampire. No wonder dark literature is so popular. Not picked up any modern science fiction author yet who can create in the reader such a nameless, formless fear of the unknown. After all, the unknown can equally be fascinating as well as scary. While most of the science fiction authors I love make it fascinating taking it closer to fantasy, H.G.Wells has made it scary taking it closer to horror. Possibly Michael Crichton comes the closest though his books would classify under thriller genre than horror genre.

What fascinated me about Time Machine is the possible future of humanity the author envisages. It is not so much about the mechanics of Time Travel or participating in history or marveling at the future that most travel tales are about: it is more a dire warning about the future mankind is headed towards.  In the future he seems humanity splitting up into two species – the workers and the aristocrats. The workers stay underground and begin to turn into mindless brutes while aristocrats having nothing to do with all needs taken care of by workers and technology begin to turn into mindless pleasure seeking dandies.  It is not merely speculative. We see this happening in the current world. The poorer sections are taking to crime; the rich are staying in their ivory towers and turning pleasure seeking hedonists with the enterprising middle class, the bridge between the two slowly thinning out.

Island of Dr. Moreau is a different type of story. I call it a classical horror story. Ghosts, witches and vampires have become so cliché that they have ceased to frighten. What strikes true fear in one’s heart is the incomprehensible.  This is one such theme. The protagonist lands in an island and finds men who behave in a strangely weird way only to discover they are animals transformed by Dr. Moreau into humans using his genetic engineering techniques. Then as the story progresses the animals men begin to regress back to their animal forms. It makes such a creepy read with the protagonist left alone with man like creatures whose behavior keeps changing every day and becoming more bestial. At a metaphorical level I found some similarities with ‘Lord of the Flies’.

War of the Worlds is a lighter read compared to the other two. But the book maintains tension throughout and there is always sword hanging over the head of the protagonist with aliens systematically taking over the earth and closing in on him. Ending is quite optimistic and even somewhat humorous but for most part the book is a grave read too.

Overall I would say H.G. Wells is a foundation read for anyone getting into serious science fiction. People who like serious literature and dark fiction will also enjoy these works. Definitely not for the fainthearted or those looking for  light entertainment.