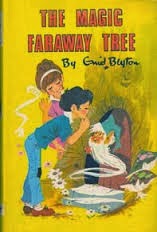 Enid Blyton is well known for her school stories and mystery stories. But she has also made her forays into the realms of fantasy. Most of her works in this genre are short stories. However she has at least two complete series in this genre – ‘The Wishing chair’ and ‘The Magic Far Away Tree’. She has also written a nice fantasy novel adapting John Bunyan’s ‘Pilgrim’s Progress’ for children. The ‘The Magic Far Away Tree’ was probably my first introduction to the fantasy genre though at that time as a 12 year old, I did not know it as a genre. At that time I had been so besotted by the book “The Magic Far Away Tree’, that I borrowed it from the library and read it on four different occasions and still did not have enough of it. So I actually tried to forge the library seal on a different book and exchange the books.

The series has 4 books – ‘The Enchanted Wood’, ‘The Magic Faraway Tree’, ‘The Folk of the Faraway Tree’ and’ Up The Far Away Tree’. The stories take place in an enchanted forest in which a gigantic magical tree – the eponymous “Faraway Tree” – grows. The tree is so tall that its topmost branches reach into the clouds and it is wide enough to contain small houses carved into its trunk. The forest and the tree are discovered by three children named Jo, Bessie, and Fannie, who move into a house nearby.

The tree has lot of fascinating features and equally fascinating folks live in the small houses carved into its trunk. But all that pale in comparison to the interesting fact that the cloud happens to be a portal to alternate dimensions. The portal remains open for some days and then the portal closes and a portal to a new world opens. Some of these worlds are good, some bad, some even ugly but definitely none uninteresting. The land of topsy-turvy where everything is upside down, the land of spells where witches and goblins sell magic spells, the land of goodies, the land of dreams are just few of the lands. Of course the new worlds are simplistic compared to the kind of worlds visited by the star trek crew or the Star Gate team. But then one must remember the average age of Enid Blyton’s primary market segment. And one cannot but praise the amount of imagination that has gone into some of the worlds and the level of details. For instance I could relate to the description of the land of dreams where logic is thrown to wind and things keep changing so suddenly.

However interesting and imaginative a fantasy is, one cannot fully enjoy without relating to the characters. One feels a vicarious pleasure in reading a fascinating experience through the eyes of someone one can relate to. That is why a travelogue is much more interesting than a simple travel guide. Whereas a travel guide is just a set of dry facts, one really sees the land and people through the eyes of the traveler in the case of a travelogue. Same is the case with imaginary worlds. It not enough to just create interesting worlds but you need interesting people as well. Enid Blyton has excelled on this count as characterization has always been her forte. One should read the ‘St. Clare’ and ‘Malory Towers’ series to see the richness of her characterization. The Far away series has its own fascinating protagonists such as Silky the friendly fairy, who is simple and sensible, Moonface who is sensible but gets excited on occasions and acts impetuously leading to trouble, Saucepan Man, who is deaf and frivolous and a few other interesting secondary characters as well. The 4 children who are the main characters are like any others in Blyton’s mystery stories. Joe is the responsible elder brother. Bessy and Fanny are just two nice girls, hardly distinguishable from each other, maybe the only flaw in the characterization. Dick is mischievous and often gets into trouble.

Overall it is a must read for anyone who is tired of the rigors of the real world and wants to take a flight of fantasy. But, yes. It is strongly oriented towards a younger audience. Also the high priests of fantasy may not be too impressed as it lacks the element of myth and she has stayed clear of any details of the governance, economy, science (Surprised? Yes fantasy has its own science too, a fantastic science) etc. which serve to sustain these fantastic lands.