Children of the Lamp series 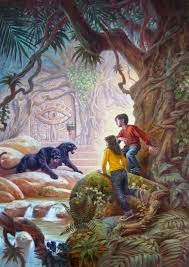 Ever since the time of the Arabian Nights, Genies have fascinated many authors and there have been multiple stories written in which Genies play a pivotal role. But most of the stories are built similar to Aladdin and the Magic Lamp, with the one holding the lamp or bottle the protagonist and the story revolving around the effect of the wishes on the life of the protagonist. Usually the villain is a contestant for possession of the power of the Genie. But ‘Children of the Magic Lamp’ does a different take, approaching the story from the point of view of the Genies.

P.B.Kerr has indeed done a great job, building an entire fantasy world around Genies. Fantasy is a double edged sword – on one hand it provides boundless opportunity for creativity that allows the author to build an entire world from scratch; on the other hand, there is the temptation to go overboard and create a completely crazy world without any limits or boundaries. As they say the true touch of the artist is in knowing when to stop. I must say P.B.Kerr has done a great job at it. He has taken most of the existing myths about Genies from other stories and woven a logical basis connecting all of them. He has defined six different tribes of Genies – three good and three evil. He does not give them boundless power but has set boundaries to their power and has created rules around which the world of Genies function. What J.K. Rowling has done to the world of witches and wizards, P.B.Kerr has done to the world of Genies.


Whereas he has done a great job, it still falls short of Harry Potter Series. In reading works like these that just falls short, one can decipher the elements that have contributed to the success of Harry Potter. For one, while one perceives a depth in J K Rowling’s world, despite all efforts, P.B.Kerr’s world feels more like a façade. At a superficial level, the story seems to have everything that Harry Potter series has – history and legends, a Genie society with their own unique customs, traditions and games and a science behind the magic. But somehow while J.K. Rowling’s conveyed a picture of exposing just the tip of the iceberg with much more to explore below the surface, I felt more claustrophobic in P.B.Kerr’s world. A couple of reasons I can think of are lack of development of minor characters who do not play a role in the adventure and limited focus on general day to day conflict free life. So reader does not have the luxury of exploring the fantasy world at a leisurely pace.

Lack of overall conflict is another thing that is a letdown at a series level. Whereas every book has a conflict, each book works as a standalone episode and there is hardly any thread of overall conflict running across the series. Of course there are the historic hostilities between the good and evil Genie tribes. But there is no personal conflict like the one between Harry Potter and Lord Voldemort. There is nothing across the series for the reader to eagerly look forward to. Another aspect missing is the depth of characters. The main characters I feel are stereotypical. There is hardly anything unique and memorable about them that stays with the reader.

One thing that the author has done very well in this series is the humorous tone of narrative he has maintained throughout. The humor is just right to give the reader regular laughs without making the entire story a complete joke like some of the spoof fantasy. Though I personally enjoy the laughs, somehow spoof fantasy does not completely satisfy me.

Overall I felt it was a decent read for children as well as adults. If I have been more critical in my review, it is because I felt it had much greater potential and stopped just short of the greatness that J K Rowling managed to achieve with Harry Potter. Before I conclude, I must note this series is still in progress and yet to be concluded.