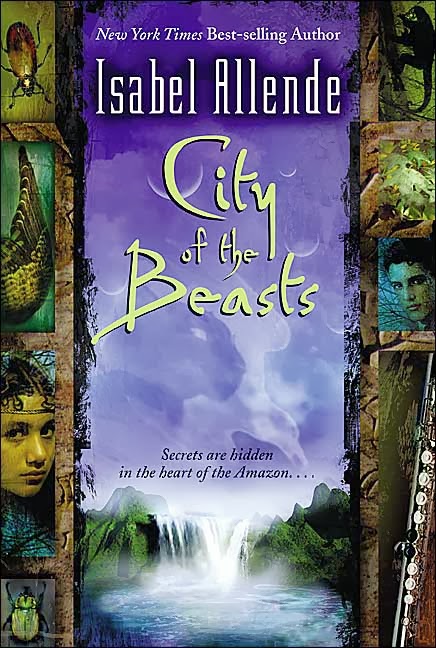 One of the benefits of globalization is that books from all across the world have been made available to us. The downside of reading translations is of course the beauty of the author’s language is lost but the upside is that we get exposed to new worlds and ideas. This is more so in children’s fantasy because this genre is more about imagination and ideas than words. One fascinating foreign author I discovered was Chilean author Isabel Allende. I was so fascinated by her children’s work that I even attempted some of her works for adults and actually enjoyed them – possibly the only feminist literature I have read.

Coming to this series – it was three books – ‘City of the Beasts’, ‘Kingdom of the Golden Dragon’ and ‘Forest of the Pygmies’. The story is about two children Alex and Nadia who go exploring the  jungles of the World  with Alex’s grandmother Kate, a National Geographic reporter. For most parts, it reads more like a regular jungle adventure like King Solomon’s mines or the works of Willard Price. But there is a certain mystic element to the story – the two main characters’ forays into the spirit world and communication with a shaman and the magic elements have a key role to play in the story. That made me put it under children’s fantasy.

Overall the story has a conservationist theme. I found the stories to be quite gripping and managed to maintain interest throughout. Each of the books takes us to a different part of the world and exposes the reader to the indigenous tribal culture. The first book as I mentioned earlier takes us to Amazon; the second one to Tibet and the third one to Africa. Like most children’s novels, the stories have an underlying theme of protagonists coming of age. There is also this angle of romance between the two characters that evolves as the series progresses. Somehow the authors of older times such as Enid Blyton, C S Lewis and Frank Baum, kept children’s fiction completely free of any romantic elements, the modern crop of authors don’t shy away from introducing romance in their works. Maybe it is a reflection of the changing mores of society where dating at school, Prom nights and stuff has become the norm! For all we know, next generation’s children’s fiction might contain explicit sex in it. While I refrain from making any value judgments, I see this as a fudging of lines between children and adults fiction. In the earlier times, the distinction between children’s and adult fiction was about the emotions and desires of the protagonists – while adult fiction tended to revolve around romantic relationships and power politics, children’s fiction would revolve around innocent pleasures of life such as eating, playing and relationships with siblings, parents and friends. Nowadays, if at all children's fiction differs from adult fiction, it seems to be in terms  of shallower characterization and weaker plots.

My digression into a tirade against current state of children’s fiction however is in no way directed at this particular author. Her work came as a breath of fresh air to me and I immensely enjoyed each one of the books. Her vivid descriptions brought the jungles to life and her descriptions of spirit world had a surreal feel to it. Despite the loss in translation from the original Spanish, I kind of liked her writing so much that I ventured into her works for adults. I somehow get this gut feeling about authors – like I wanted to try this author’s works for adults and was rewarded by a wonderful reading experience. On the other hand, though I liked Harry Potter much more than City of Beasts, something told me I did not want to read J K Rowling’s works for adults and the reviews I have seen seem to vindicate my stand.

I would definitely recommend this book to everyone – children and adults, fantasy enthusiasts and the ones who do not read fantasy, the serious reader and the casual reader. This is one of those books that have something for everyone.