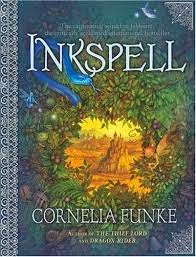 Somehow I have always liked stories that explored the lines between reality and illusions. Illusions can take various forms – dreams, day dreams, imagination, hallucination, schizophrenia and religious beliefs! I have read quite a lot of theories that suggest that strong belief can convert imagination into reality. A lady called Rhonda Bryne has written a book called 'The Secret' around this concept and almost got a cult following. Then we have Hindu Advaita philosophy which takes the other side and suggests that what we perceive as reality might itself actually be an illusion. We have lot of books and films exploring the entire range of possibilities around reality and illusion. ‘Matrix’, ‘Inception’, ‘The Truman Show’, ‘The Fight Club’, ‘Mulholland Drive’ are some movies that immediately come to my mind.

The Ink World series by Cornelia Funke consisting of 3 books – 'Inkheart', 'Inkspell' and 'Inkdeath' explores the theme of the characters and the world from a story book springing to life. The concept kind of appealed to me because I always felt reading a story from a book felt more real than idle imagination inside my head. The story revolves around a talent called 'silver tongue' that enables certain people to read something out of a book and make it come true. The protagonist of the series is a girl Meggie whose father is a silver tongue. Her father reads some dangerous villains out of a book who are out to create trouble. The first book is about how they deal with these villains. In the later books, the people from real world go into the story world. The story is found to have a life of its own taking off from what the writer has created. The writer however still seems to have a God like power to change reality in the story world. But then there is a catch. Whatever new reality the writer introduces should be consistent with the world already created and its laws. Otherwise it can not be read out and made to come true. Somehow this concept made me reflect over the nature of God. In Ramayana for instance, it is revealed even God is not allowed to bend the laws of nature.


Moving on to the other aspects, the book follows the usual format of adventure, quests and political intrigue. The first book is a simple adventure. The second book is a quest in a fantasy world. In the third book we get into the thick of political intrigue. The one memorable character is the fire eater Dustfinger. He is the only one who seems fully and properly human and someone the reader can sympathize with. In the first book he seems to be a sly character like Wormtail in Harry Potter. But the later books reveal greater facets of his personality. The rest of the characters are shallow and move around like shadows hardly leaving any impression in the mind. Today, 4 years after I have read the series, I hardly remember anything at all about the protagonist Meggie.

One of the things that make books fascinating is the writing style and use of words and phrases. That is lost in this book, this being a translation from original German. Possibly the language would have been much more fascinating in the original German. I am kind of familiar with the translator Anthea Bell having attempted to read her translations of Enid Blyton books in German. Possibly that is one of the reasons the tone of Cornelia Funke’s narrative sounds like that of Enid Blyton at times.

I would definitely rate this series as one of the best books in contemporary children’s fantasy. However the depth of character and the range of imagination are too limited for the hardcore adult fantasy buff. The overall concept is imaginative but I find her conservative in the details. The Ink World is the modeled on medieval Europe like most popular fantasy and has no wow factor as such.