Cloud Black and the Seven Sardars 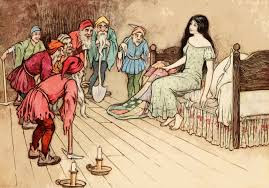 Once upon a time there was an evil witch. But wait a moment! Who believes in magic anymore.. So keeping with the current times the current times, let us make the witch a socialite: a former model and an actress. An actress, who does dope, drinks like a fish and smokes like a chimney. In short a complete vamp. The original witch was married to a king. This socialite instead is married to a liquor baron who also owns an airline and an IPL team. Is he any less than a king, eh?  Of course being a socialite and not a witch, she has only regular mirrors which do not say anything when asked "Mirror Mirror on the Wall, who is the fairest of them all?" But she has better means of checking her popularity than dumb mirrors. What else are news websites and tabloids for, to say nothing of social networks?

Now coming to the heroine. The girl in the original story as we very well know was called Snow White. But then whoever has heard of anyone naming their daughter with a name that sounds like a detergent in the current times? Maybe we can keep some more realisitc name for her like Aishwarya, Deepika or Alia.But then that would be deviating too much from the story.  We might have gone with the original name if but it was just outlandish. But there happen to be other issues: the name has a racist tinge to it and seems to favor a certain skin tone. So let us call her Cloud Black instead. And obviously a girl called Cloud Black has to be dark, right? So dark, she is. Or shall we use the term dusky?

Now this socialite one day discovers that  Cloud Black who happens to be her step daughter as well by an interesting coincidence that usually happens only in stories, has suddenly become more popular than her. This could have been due to any of the many reasons. A lithe figure, generosity with compliments to strangers on Facebook, sporting accomplishments and frequent profile picture updates to name a few! But it does not matter to the story which of these it was. The bottom line was she was more popular and her socialite step mom was goddamn badly pissed. So she called up the D-company guys and asked them to bump her off. These guys take her and throw her into the sea. Why only drowning and why not some other means of death one may ask. Why not drowning I ask back. After all so many cool folks have died of drowning and one of the movies proclaimed as the most romantic movie of recent times was about folks on a drowning ship.

As luck would have it she gets washed ashore on an exotic beach complete with a year’s supply of face cream.  Now don't ask me why the face cream. We will come back to that later. And who would be on the beach at that moment but seven Sardars: seven pagal mundas on the roll. Now now! Don't jump at me, ok? I am not trying to indulge in stereotyping, cultural appropriation and what not. It is just a matter of names. That's about it. After all who else in India keeps names like Happy, Grumpy, Honey and all? I am not Shakespeare you know to just say "whats in a name" and step out to smell the roses. Anyways leaving the bard aside and getting back to the story,  the presence of the Sardars makes the beach exotic. But why seven of them? It will be cool to say there were seven of them because there are seven notes in music or seven days in a week. But honestly, seven is just a random number just as likely to occur as six or eight. If we start explaining all this, this would be a novel and not a short story on a blog. Coming back to the point, these dudes are rocking the beach when the sea suddenly throws up this hot babe. They just can’t stop their eyes popping and tongue lolling involuntarily. So they all hustle each other to give her a cardiopulmonary resuscitation. It is only in India, we have such a complicated name for this thing. In France, it is called just a kiss. One more example of Victorian hypocrisy, a legacy of British rule!

Well, in the original story, Snow White cooks for them, washes for them, scrubs for them and does all kind of bum work in return for a few morsels of food and the so called protection. But let us be realistic. This is the twenty first century. There ain’t no such things as hot chicks working as maid servants for peanuts. She does sleep over at their place. But they have to do their own grub work and run their beach side dhaba in the night. She sometimes gives a helping hand as a waitress at the Dhaba. In the day all eight of them rock the beach in the hot sun. The melanin in her naturally dark complexion protects her while the Sardars have turbans and beards to protect them. But she still uses the face cream anyways, because she has lots of it and the TV ads say all the hot looking chicks use them. Now do you see why she was washed ashore with so much of face cream? This is what brand managers call developing a market.

Now it will be nice to write how all the eight of them enjoyed themselves on the beach and stuff. But then what is the point? I am not one of those Bollywood movie directors or campus Romance writers.And anyways the Sardars are not the heroes. So I will leave all this stuff to the reader's imagination and focus on moving the plot ahead.

All good things come to an end. And as luck would have it, the paparazzi suddenly discover her on the beach and the news of her still being alive hits the Page Three of all the tabloids. Thus her step mom learns of her survival. She decided to make one last ditch attempt to bounce her off. She comes in guise of a suave face cream saleswoman and palms of poisoned face cream to her. Face cream is the in thing you know. Apples and all are so cliched and old fashioned. Cloud Black falls for the sales pitch and buys this new cream despite still having so much of the old cream remaining, applies it on her face, gets poisoned and drops dead. You know like how Opal Mehta got kissed, got wild and got a Life.The Sardars come home and are shocked to find her down. They again try the cardio stuff on her but are unable to revive her. Now is the time for an ole shole hulk with six pack abs to step in complete with a cool Thunderbird or Karizma bike. Isn't that how a modern prince would like? Or at least that is what the movies have us believe.


Anyways getting on with the story, this chap tries to fondle the dead girl's face with his palm. The bloody necrophile! But as luck would have it, that wipes off the poisoned cream from her face and she revives. The moment her eyes open, they fall on this dude ogling at her. She finds he is not too bad looking and she realizes she better fall in love with him if she does not want to be doing Balle Balle with the Sardars the rest of her life. So she does the needful. They call a Pandit, get married and live happily ever after. And so ends the tale of India' 21st century Snow White. I mean come on. This doesn't seem like a choice an intelligent girl of the 21st century should be making and all that. Fine. But this is not a mega serial. It has to end somewhere. Since we have already got past the funeral stage, why not end it in a marriage? I rest my case.
Email Post
Labels: Fairy Tales Retelling