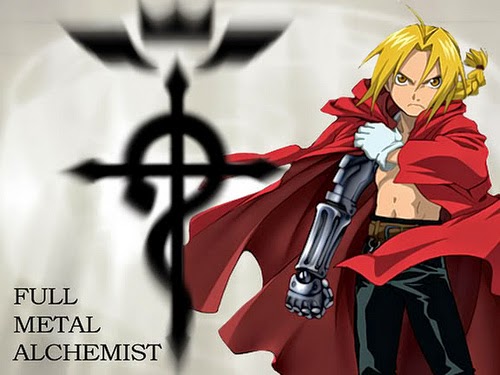 Full Metal Alchemist is an anime with classic fantasy theme. It is set in a parallel universe where humans have mastered the science of alchemy. It can also be considered a science fiction as string theory talks of multiple dimensions and physical laws being different in worlds existing in other dimensions. So it is conceivable that in a universe with different physical laws, alchemy might be feasible. That is the premise this story is based on and the author has gone ahead and created this entire science making use of some popular associated myths such as that of the philosopher’s stone that many of us may be familiar with from Harry Potter.


The story is set in the alternate universe’s version of England of the nineteenth century. The protagonist is a young alchemist Edward Elric who has a prosthetic arm and leg and is accompanied by a sidekick who resembles a robot. As the story unfolds we come to know that the robot is actually his brother Alphonse and that the two brothers' condition is a result of Edward’s failed attempt to use a forbidden transmutation to bring his dead mother back to life. He now seeks to reverse the damage he has inflicted on his brother and for that he needs the philosopher’s stone, which gives the user ability to overcome the natural laws of alchemy. The whole story follows the adventures of the brothers in their quest for this philosopher’s stone.

The story has three interesting set of antagonists each with their shades of grey. First is the State of Artemis, which has a military government headed by dictator. State Alchemists are an arm of the state military. Edwards Elric himself is a member of state military and has many friends there. However like any organization, it has all kinds of characters with different motives and the leadership have their own dubious schemes at work. Second is a character called Scar who has a serious grouse against State Alchemists for decimating his entire tribe. He is a powerful alchemist, who has styled himself as some kind of a hand of God, who goes out doling punishment to people who he considers evil – mostly errant alchemists. He also has plans running to destroy the entire State Alchemist organization. And finally the most interesting set of antagonists – the homunculi – humanoid creatures with mysterious origins and even more mysterious motives. There is a deep aura of darkness around them and evoke a deep sense of curiosity and dread in the reader like the charm a vampire holds on his victim.

The story is not black and white and we are treated to complex characters on either side with motives and prejudices shaped by the events in their past. Many of the adventures are interesting and we are treated to a myriad set of interesting people and events. As we go along the story we learn more about the science of alchemy, the state of Artemis, the philosopher’s stone and the homunculi. This sense of discovery is something I really love in science fiction and fantasy.

As I talk about this series, I would like to mention one particular adventure that I found so disturbing that it remains with me vividly many years after I have watched this serial. Ed and Al encounter a cozy family of a State Alchemist, a widower with a sweet little daughter and a loyal dog. The man seems to be an intelligent researcher who is trying too hard at his job and a doting father. The girl just adores her father. The girl’s mother has mysteriously disappeared ten years back – around the time when the alchemist has had his last success – creation of an intelligent talking parrot which suddenly became depressed and stopped talking. After that the military has been pressuring him to come up with other such creations and he has not been able to. The state’s patience is running dry and the State Military has given him an ultimatum that if he does not come up with something within next couple of months, state would cancel his alchemist license and withdraw his monthly stipend and other privileges. So far so good! Ed and Al have a good time with the cute little girl and the playful dog, empathize with the family’s troubles and eventually bid farewell. They return after a few months to find the alchemist has suddenly turned hostile. It seems he has finally managed to effect a transmutation that helps him retain his office. He shows them a dog like creature that can talk. The creature however looks gloomy depressed and strangely familiar. The alchemist does not allow them to meet his daughter and turns them away from his door. On probing further, Ed and Al discover that he has created what is called a chimera by fusing his daughter and his dog. They newly created creature has some memories of the girl and some of the dog but is not really the girl or the dog. It is soulless and without an identity and hence depressed. I found it so unexpected and so shocking – it haunted me for days. We also come to know that the alchemist had created the talking parrot a decade earlier by doing the same to his wife.

While the series has lot of depth and there is lot of darkness being portrayed, it is not all sinister either. The brothers have their humorous side too that brings comic relief. Overall it is in an intriguing story line with a well-developed and interesting premise. The story proceeds at a gripping pace and can easily keep viewer riveted for 52 episodes. Apparently the storyline is different in the manga but I have still not had the opportunity to check that out. But I am quite impressed with the anime version itself and would definitely recommend it to the hardcore science fiction and fantasy lovers.