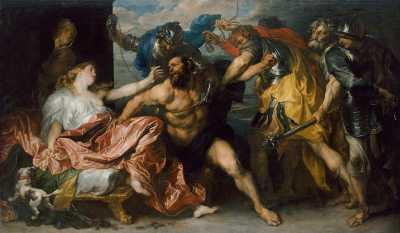 My hair needs a recharge! I need it badly. Without my hair, I am nothing. It is a matter of life and death for me. I know what you are thinking. That I am comely lass getting worked about about a silly party? Let me warn you. You better change your way of thinking or I will come at you with the jaw bone of an ass. What? Do you think I am joking? The thousand Philistines who thought so paid with their life.

I know it is hard to believe this blind hairless man bound like a chained dog is a great warrior who could kill a ferocious lion with a single blow. But then this is what comes of falling for the wrong woman. I loved her. She betrayed me and sold me out to my enemies. Sounds familiar, eh? But then what has all this got to do with getting my hair recharged you may ask. It is a long story. But then I have nothing else to do. So I may as well entertain myself by telling you my story.

It all started years back when Israel suffered under the yoke of the Philistines. God’s angel appeared in front of my mother and prophesied that she would give birth to the savior of Israel: me. Yes, me! You still don’t believe me, do you? Anyways, let us continue with the story. These Gods and angels never give any boon without a catch, do they? So this was the catch: I would be invincible as long as I never shaved my seven locks of hair. The moment I shaved my hair, I would lose all my strength. Then there was this additional point about me and my mother not drinking wine. But that was probably just one of those dud clauses that serve as fillers in any legal contract. The real deal was the hair.

As long as only my mom and I knew of it, everything was fine and dandy. Who would possibly imagine a man’s strength lay in his hair, eh? Also not like I went about kicking every Philistine ass from the day I was born. Far from that! I actually fell in love with a Philistine girl and was all set to marry her. But no! I wanted to show off my intelligence of which I still had pretensions then. I made a bet with some fellas in the bride’s party regarding a silly riddle I made up. When they cheated, I lost it and kicked their ass. My father in law got pissed and called off the wedding. That obviously got my goat and I went about kicking more ass. One thing led to other and I ended up becoming the bogey man of the Philistines.

They got desperate to knock me off and sent this girl Delilah after me. I have always had this weakness for pretty women. I fell for her, hook, line and sinker. After all I am a hero, not a saint. She nicely played me up for a sucker and kept pestering me for the secret of my strength. Initially I tried to fib her by telling her I would lose my strength if trussed by with a bowstring, if tied up by unused rope and stuff like that. I guess you get the general idea. But women, you know! How much ever we have our will, they will eventually have their way. She was persistent like a leach and finally got me to spill the beans. I am surprised how I did not see through her despite her immediately trying out every damn idea I gave her for sapping my strength. Wish God had given me at least some ordinary brains as well along with all this extraordinary strength.

So it came about that she had my seven locks of hair chopped away completely while I was asleep. Can you imagine? All the hair that I had carefully nurtured since my birth! And then she threw me to the wolves. All for a few silver coins! The Philistines dragged me away and subjected me to all kinds of humiliation. I was kept like a caged animal and everyone came to poke fun at me. They gouged away my eyes with hot iron. They are not done with me yet. The ultimate ordeal still awaits me. In a month from now, they have this feast to their false God Dagon. They plan to use me for public entertainment at the feast and finally sacrifice me to their evil God.

Is this what my life has come to? Did God create me, Samson as the savior of Israel for such an end? I know I goofed up. I should not have left my heart hanging out on my sleeve. But I have already paid a heavy price for my foolishness. Now that my day is almost done, I want to go down in a blaze taking all those scoundrels with me, not snuffed out like a bloody cockroach. Oh, great God, show me mercy. I need my strength back for one last time. I need my hair to be recharged. I need my life to be recharged.
Email Post
Labels: Mythology based Fiction