A brief history of Washing 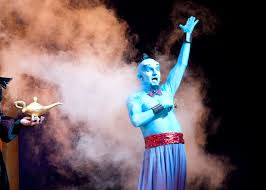 Rahul quickly shoved all his dirty clothes into the washing machine, put in some of that new vibrating molecules soap powder, closed the lid and went out for dinner. After a momentous evening with his girlfriend, he came home in a rather good mood. But the mood was spoilt when he opened the washing machine. The clothes were in exactly the same state he had left them. The soap powder lay on top of the clothes, insipid and lifeless. It seemed like this whole vibrating molecules thingy was just a con job.

He pulled out his lamp and rubbed it angrily. Copious amounts of smoke began to emerge out of the lamp. Soon the smoke coalesced into the figure of a heavy set man in ancient Chinese costumes. “At your service, master,” he said bowing politely to Rahul. As many of you might have guessed it was a Genie.

Now Genies come in various types. The one many of us might have read of was indeed a very powerful one. But not all Genies are that powerful. Most Genies have their limitations and have specific areas of expertise within which they can grant wishes. The Genie in question here was a Chinese variety known as Dong Ki. Its specialty was domestic chores and transport. Which in effect meant it was a house maid, gardener, cook and chauffeur all rolled into one. But no way would this Genie be able to raise a magnificent palace, bring its master all the riches of the world or defeat his enemies. For that one would require the services of the architect Genie, the thief genie and the warrior genie respectively. The warrior genie was incidentally called the Dong Xi. Chinese names for genie are also apparently as confusing as the human names. But here there is no scope for confusion as there is only one Dong Ki in this story.

“Look here!. The clothes are still as I had left them. The powder you gave me was totally useless,” Rahul shouted at the Genie.

The Genie tried to calm him. ”Did you open the water tap and switch on the washing machine, master?”

“But you said the molecules of the powder vibrate by themselves and I need to soak no more. So I thought I will save power and water.”

“You seem to have missed the whole point. In order to appreciate the concept of vibrating molecule, you need to know the whole history of washing. It goes way back to the time of your ancestor, the minister at the court of king Raja Raja Chola.” As much as Genie hated work he loved to tell stories. Rahul was also very fond of listening to stories. So the idea of story calmed him down and he settled down on his chair to listen.

“Those days there were no cars, buses and bikes. So it was I who managed most of the transportation for your ancestor. One day I was transporting a consignment of special ashes for him. It was very heavy and it was a hard task for me. I was crossing a bridge when my feet slipped and I fell into the water. I was fully soaked. But when I emerged out of the water, the burden had reduced drastically. I was so delighted. From them on the motto was soak more, work less. Every time I crossed the bridge, I would jump in for a soak.”

Rahul burst out into peals of laughter, “You are one wicked demon! You have been dissolving all my ancestor’s magic ashes in the water?”

“Oh. Is that why master seemed unhappy every time I did that? Anyway continuing with my story, one day we were returning after a long stay at a neighboring kingdom. We were passing a bridge and I did what I usually did. But the minute I got soaked instead of the burden reducing it had increased. What the hell was happening, I wondered. Had my master found out my trick and cast a ‘soak no more’ spell on the bundle? “

Rahul could not suppress his laughter, “You deserved it, you old rascal. Obviously wet clothes will become heavier.”

“But, I must say,” the Genie continued, “It was not without its positive side for I found it had become easier to wash the clothes. So soaking was not entirely bad after all. Either it reduced your burden or made washing easier.”

“In a few more years, it was time for yet another discovery. This was during the time of another of your illustrious ancestors: one of the nine jewels in the court of King Akbar. This time the consignment had both magic ash and clothes to be washed. As usual when we passed the bridge, I jumped in to get soaked. This time there was only a slight increase in weight. Guess the ash and clothes balanced each other. But later I discovered that this new event had further improved the effectiveness of washing process. I assumed it had something to do with the magic ash mixing with the water in which the clothes got soaked. ”

Rahul gave a whoop of delight, “Don’t tell me you were the one who discovered soap powder!”

“I made my next breakthrough when I was serving your great grandfather who worked as a civil servant under the British rule. I had just emerged out of the water after soaking the clothes and the ashes when suddenly an earth quake started. It was minor one. So though I was badly shaken by the vibrating ground, I was able to reach home unhurt. But I discovered to my delight that washing had become still easier. So it was ash, soaking and vibration that did the trick.”

Rahul was now looking at the Genie with genuine admiration “So it was again you who discovered the idea behind the washing machine as well! I wonder what the world would have done without you. Next I guess you discovered you can manage without soaking and have the vibration on the soap powder molecules itself instead of on an outside machine, eh? But unfortunately this innovation has come out a total cropper! “

The Genie grinned sheepishly. “Technical challenges, you know. The molecules cannot be stored in vibrating state as they will escape away. So we need to trigger the vibration just before washing only. For that the washing machine needs to be run. And we need water to bring the molecule in contact with the clothes. So we can’t avoid the water either. But I am working on a better solution to both these issues. Soon a day will come when we need to soak no more”
Email Post
Labels: Mythology based Fiction