The Gospel of Seth 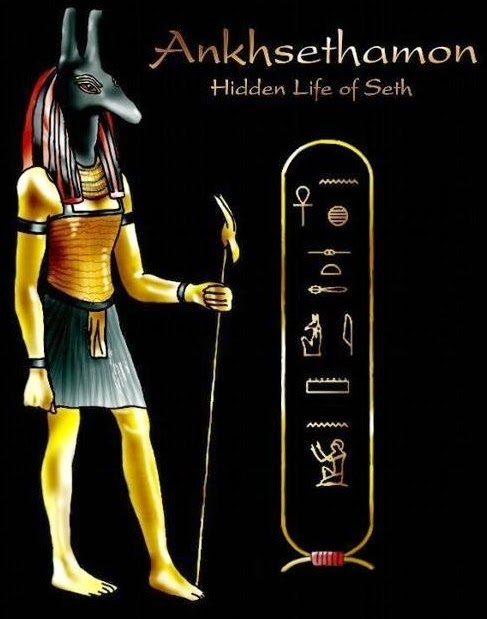 I am going to tell you all the story of our God the almighty Seth. The real story! Not the lies the blasphemous infidels spread about him. It is only time before the foul vermin face the wrath of Seth. He has so far chosen to be merciful. But I assure you, my dear brothers and sisters - his mecy will not last forever. So listen keenly and walk the path of righteousness before it is too late

Seth was born of the Earth and the Sky – He the Lord of the desserts. He, the disrupter of order, the harbinger of change! The glorious storm God who rides forth to war! Along with him were born his brother Osiris and sisters Isis and Nephthys. Our Lord allowed Osiris to rule in his stead and he strived to lead mankind towards change and progress. But it was not to be. Osiris wanted to enforce order and conformity. Our Lord saw that his brother was leading his people towards death and decay for stagnation is naught but death itself. So though it pained him, he decided that people’s need was more important than his love for his brother - Osiris had to be removed from the throne for the good of the people.


He sought to do it in the most painless manner for though he was the Lord of War, he knew internecine battles always ended in disastrous consequences. So he swallowed personal pride and chose guile over force for the good of his people. He had a beautiful coffin designed to exactly fit Osiris. It was such a magnificent feat of artistry that everyone lusted to possess it.

When everyone approached him regarding the box, Our Lord decreed, “This box shalt choose its owner and not the other way round. Each of you shalt enter the box and he who fits snugly into the box shalt be the owner of it.”

Everyone in the kingdom wanted the box as did his greedy brother Osiris. One by one they entered the box. One was too long, one too short, one too fat, one too slim. For the box was made to fit just the one it was made for. Osiris himself could not resist the temptation and entered the box. He fit exactly like a child in its womb as the Lord closed shut its lid.

“It fits me perfectly. The box is mine.” Osiris hollow voice seeped out through the small gaps in the box.

“Well, well! Then to you it shall belong, my dear brother. And you to it, for eternity.”

So saying our Lord had the box sealed with molten lead and thrown into the River Nile. Then he took over the burden of the kingdom on his able shoulders and began to take the country on the road to glory. But then the world is full of evil people who hate progress and want to take things back to mediocrity. Our lord had vermin breeding in his own den: his two sisters Isis and Nephthys. They went looking for the Osiris’ coffin. Isis' betrayal was understandable since she was Osiris’ consort but Nephthys? That was the unkindest cut of all.

They managed to find him and tried to bring him back to life. But nothing escapes the eye of our Lord. Any of you who thinks you can get away with your sins, remember that! He came upon them as they were trying to revive Osiris using the darkest of sorcery. He grabbed the corpse from them, tore it into fourteen pieces and had them flung across different corners of the world. But as most evil people are in their villainous schemes, Isis and Nephthys were just too persistent. They again went looking and found every single piece and sticthed up Osiris together again. They could not revive him fully but that filthy sister of the Lord managed to revive him sufficient to get herself impregnated by the corpse. Can you imagine that – impregnated by a corpse!

The Lord had a soft corner for his siblings. So he refrained from hunting Isis whole heartedly. If he had really wanted to capture her, there was no way she could have escaped his omniscient eyes. She abused his brotherly sentiments to evade him and bring up her demon spawn. She even managed to gain power for her whelp by tricking the Elder God Ra. With the power his mother had gained him through ill means, the pretender challenged the Great Lord’s claim to the throne. The Lord could have struck him down then and there calling upon him the wild desert storms. But our honorable and noble minded Lord wanted to even give even his vilest foe a fair chance. So he chose to honor him with a fight. They fought for three days. The demon spawn Horus used the darkest of magic to confound our Lord but still he still could not stand up to the Lord’s true power. A few more hours and Horus would have been vanquished but his vile mother would not have it. She went to the other Gods and shed such copious amount of crocodile tears that would have put the God Sobek to shame. Just as the Lord was about to deliver the final death blow, the other Gods came and stopped them and tried to mediate.

The old God Thoth in his senility had been completely taken in by Isis as were most of the other Gods. Only Ra saw her for what she was and stood staunchly by our Lord. Unable to resolve the deadlock Thoth suggested a contest between our Lord and the pretender. To everyone this seemed fair and they agreed. But Thoth had a trick up his beak. He came up with completely ludicrous contests that were heavily loaded in favor of Horus. Our Lord could have raised a dessert storm and ground all the Gods to dust then and there. But he was the one for proper forms: while he challenged the ancient ways, he respected the ancients themselves. So he submitted himself to the ridiculous farce. But can even a mighty God hope to succeed against a confederacy of dunces. Horus, through the aid of the schemes of his vile mother managed to convince the Gods that he was the winner of all the contests. The Gods declared Horus the rightful claimant to the throne.

The Lord accepted the verdict though it was not fair to uphold the rule of law and the honor of the elder Gods so that he set an example for his followers. He left the kingdom to be with the Eldest God Ra and became his guardian, protecting him from the terrible serpent Apophis that assails him during his daily journey over the sky. It is thanks to him that Ra still sails his boat over the sky letting him shower his blessings of light upon us. If not for him Apophis would have swallowed Ra and we would have been plunged into darkness.That is the greatness of out great Lord Seth.