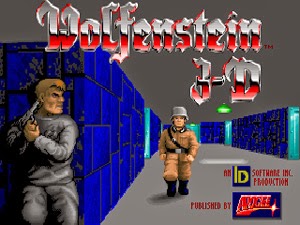 The first game I played when I got my new computer was a role playing game. It was a game called Wolfenstein. The game is set in a Nazi prison and the player controls a prisoner who is trying to escape. The prison complex is like a maze he has to navigate his way through. As he is finding his way, he encounters Nazi guards who he either has to evade or kill. He starts with a knife and he finds better weapons as he navigates around. The ammunition for his guns is limited and he has to find ammo lying around to replenish his supply. He sustains injury every time an enemy’s bullet hits him and his life force goes down. If it goes down below a point, he dies and the game ends. He has to find food and medical supply items lying around to restore his life. One of the keys to the game other than firing fast is to be able to find ways through the maze and solve some puzzles to find some objects and be able to open the door to some of the areas. That is the basic premise of this game. Since then, lots of much better games have come up in terms of variety, puzzle complexity, story line and graphics. But the basic game play remains the same.

The next game I played in this genre was the famous Quake, whose performance on a computer used to be the touchstone for the quality of its processor, RAM and graphic card performance. It had a more interesting storyline – a person trying to infiltrate and destroy an alien space ship that is trying to conquer earth. Obviously the graphics and variety of weapons and enemies was way better. Then I found another game called Hexen – a medieval fantasy this time. It had an even better storyline and a much more interesting world. While Quake, after sometime began to feel like just a random shoot out, Hexen gave a feeling of living through a fantasy adventure. The player’s character also has a history and feels kind of real.

Then I encountered a different class of games programmed in simpler language like C++, with good scenery and nice storyline but not much of high end graphics. The first of this kind I played was something called Dink Sandalwood. The interesting thing about this game is that the character doesn’t just fight. There is quite a lot of interaction with characters in the world and there are things like trade – the character has to collect items, sell them and buy weapons and magical items at shops. The story lines were way better than the higher graphic games. And this game was open source allowing people to use the world and characters to develop their own games. While graphics was not good enough, this type of game gives a much better feeling of living through a fantasy world – there are twists in the tale, betrayals conflict and even romance. Also the character keeps growing in strength as the game progresses – the player can choose to increase his character’s speed, agility, magic or defense as player gains levels. I have encountered many more games having a similar concept – the most recent one on my tablet.

As I had mentioned earlier, there are some games that combine role playing with war strategy which makes it even more interesting. There are some role playing games which have minimal combat element and only puzzle solving and story. One of the games I played of this kind was called Companions of Xanth based on Piers Anthony’s Xanth series. Another popular one was Mist. While Xanth was a game based on book, books were written based on the game’s story line in case of Mist. So strong was the storyline and game concept. The puzzles were literally unsolvable and some of friends at college bunked classes and spent the entire semester trying to complete this game.

I have heard of recent games such as Grand Auto Theft and Assassin’s Creed. I have not tried them out myself but they probably are advanced versions of the games I have mentioned in my post with better graphics, user interface and storylines. In the coming days, I see lot of fiction writers being involved in this type of games.