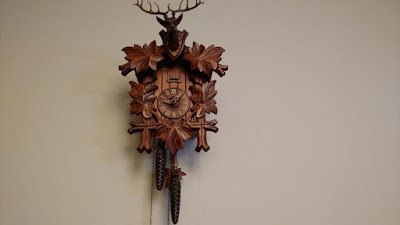 The rocking chair squeaked rhythmically. I hummed along in tune as I gazed at the frail old woman who sat on the chair. Silvery white strands of hair glowed in the darkness where the moon beams found their way to her head through the open window. There was a time when the beams would have been sucked into the darkness of these strands. Time! Isn’t that the unseen, unheard deity that reigns over the lives of mice and men? And who can know time better than me who has dedicated his life to this most powerful entity of this universe!

She had been frail then too, but in a lithe, energetic manner. She had found her way like that beam of moonlight into a household overshadowed by the deathly pall hanging over it. Cancer had extracted its pound of flesh from the house dispatching the Lord and Lady of the house to their heavenly abode in quick succession, leaving behind four orphaned young men in their wake. The lot had fallen upon the eldest of the boys to marry and bring home a new lady to keep the hearth in their home burning. It was high time too for he had dallied long enough in pursuit of elusive dreams – a corporate career, politics and civil services. All had come to nothing and he was already a broken man when he married and brought her home.

The house had always not been like this. I still vividly remember the day they had brought me home and mounted me to the wall. It had been a jolly home filled with the laughter of four ruddy boys. The father had come from a humble family of farmers. He had benefited from the government’s affirmative actions and done well for himself, acquiring an education and then a government job, eventually rising to a senior position in the state’s electricity board. He was a devout man whose daily chants reverberated melodiously in sync to the rhythm of my pendulum. The mother was a quiet lady, who worked behind the scenes, ensuring the house was spic and span and when sumptuous food made its way to the table three times a day.

I struck three times. She still continued to rock in her chair. She seemed to spend most of the time on the armchair. Sleep had never been her friend. When it came easily to her, she had been unable to embrace it and now when she needed it most, it had deserted her. Time! That had been her biggest problem. I wish I would have given her some when she needed it most and taken some away from her when she suffered from excess of it. But then time was not mine to give or take. My lot was to just measure its flow.

As a young girl stepping into the empty shoes of her mother-in-law, she had devoted herself heart and soul to the task of keeping house for her husband, over a dozen years her senior and his younger brothers, all older than her. They had all been nice and sweet to her. But not one lifted a finger to help her. They were too busy trying to find a foothold in the world to bother about the travails of the chit of a girl who has stepped into their lives. But she had toiled on happily, basking in the light of what little love her husband’s woebegone heart could spare her. When the stork flew over their roof delivering a wailing bundle of joy, it seems as if good times were finally returning to this home.

But hopes were short lived for the stork did not come alone. He was closely followed by another – the grim reaper, who came with his scythe to reap the time ravaged soul of the new father. I was sorrow struck but it was my fate to be mounted firmly to the wall, striking hour after hour calling out the time, whether it brings sorrow or joy. But not so bound to this bleak house, the brothers had fled like mice fleeing a sinking ship. Only one remaining to keep me company were the mother and child who had nowhere else to go.

Time is called a great healer. Heal it did over the years for all her toils to bring up her son as a single mother bore fruit. The son blossomed like a morning lotus under the nurturing care of his mother. He was everything a mother could hope for in a child- a vivacious child, ever attentive to the needs of his mother, had excelled in his studies as well. It had been the greatest moment of her life when he had secured admission to do masters at a highly prestigious university in the US. He had done well and he completed his masters with flying colors. She was eagerly awaiting his arrival. No wonder had she not been able to sleep. How could she?

When I began to ring the arrival of the sixth hour, the doorbell rang. She jumped up from her chair as if I had taken her back twenty years in time. My heart leapt for a moment and I wished I could ring continuously to herald the arrival of the prince. But then a clock does not have a freedom with its ringing a dog has with its tail wagging. That is probably why dogs are called man’s best friends and never clocks though we hang around with men for much longer with equal loyalty through the thick and the thin.

The door opened and I saw a man standing there. But it did not look like him. Who was this? We seldom had visitors. I soon had the answer for four men entered carrying a large box. And in the box lay….. A road accident, they said. It was one of those moments I wished I had the power to make time go in the reverse direction. A moment that should never have been had come to pass. And I a mere recorder of time could do scarce but watch mutely as I always have.

Strange are the ways of time. I have kept tracking it for over half a century. Every time I think I am near to understanding its ebbs and flow, I find I could not have been further from the truth. I have stopped trying to understand and I now just go with the flow. I have also learnt to detach myself from the lives of mice and men. For all it brings is pain. Mice run up and down as I strike one and two. I just keep going – Hickory Dickory Dock, Hickory Dickory Dock.
Email Post
Labels: Intriguing Points of View