The Fiery Adventures of Salamander 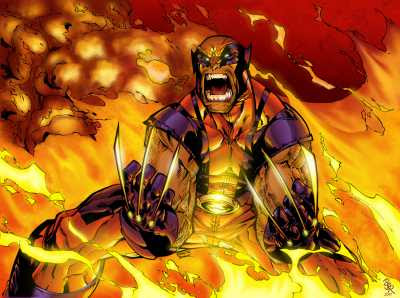 The dark league has assembled. For a meeting. The largest of its kind. And the most diabolic. All of them are here. The sharpest minds of the universe have united. For a common cause. To take on their common foe. Now who is the foe that the darkest of the dark, the deadliest of the deadly, the cunningest of the cunning fear? Who? Who? Who is this? He strikes such fear in their heart that they even fear to say his name. For enemy of the dark is the light. And no other do the creatures of the dark fear as the harbinger of light. And of fire. Salamander is his name. Preying on darkness is his game. Ridding the surface of the shadows is his claim to fame.

They meet secretly in the dark. Below the surface of the earth. When the whole world sleeps. They huddle furtively below the ground and confer. On how they may deal with their nemesis. How to be free of this menace. How to once again emerge on the surface and reestablish the reign of darkness.

The plan is an extremely diabolic one. A trap for heroes. The bait, a damsel in distress. The kind whose call heroes find irresistible. This damsel would be a siren who would lure in our hero to his doom. A phone call is all that is needed. A plea for help from a husky feminine voice. And our hero is all decked up. In heroic finery. Including briefs over his pants as an extra protection against vicious attacks on his nether regions. He is soon on his way. Rushing towards the damsel’s place of captivity. Like a fly towards a lamp.

A gloomy mansion awaits him. Dreary, dark and dubious it stands. “Will you walk into my parlor”, the spider seems to be saying to fly. The crusader of light drawn into den of darkness. Rushing in where angels fear to tread. For fearless is he. No ogre nor giant nor troll nor demon can stand up to his fiery attacks. But he is in for a surprise. For none of those await him inside the mansion. In fact, nothing at all awaits him. Complete nothingness greets our hero. He rushes from room to room in quest of the lovely damsel and her cruel captors. But not a single living soul is to be found. A void seems to have taken over the entire mansion. But the mansion does not seem to run out of rooms at all. It seems like someone has cast as spell. Or a curse. A curse of infinite rooms. Is this the trap? It would be un hero like to leave even one room unsearched. A hero can’t leave a damsel to her fate and flee to safety. But if the rooms do not run out, the hero would be stuck for eternity. Or till he is drained of all his life force. Exhausted and enervated. He is already beginning to tire. Even a hero has his limits.

When everything seems to be all but lost, there emerges a sudden sliver of hope. A whiff of hope in fact. A familiar, pleasant odor. The smell of something burning. Fire! Just the thing to reenergize our hero at the brink of being extinguished. Like iron filings drawn to a magnet, he flies towards the source of the smell. Soon he finds himself in a large room. So large in fact that it can almost be called a hall. There is table in the middle of the otherwise empty hall, a chair next to it. A huge urn with lovely red flames leaping out of it sits on top of the table.

Oh, joy! Those lovely crimson flames! The lovely little embers that keeps the fire of life burning! He bounds on to the chair and reaches out for the delicious flames. But his tongue feels no pleasant burning sensation. There are no flames. It is just an illusion. A trap! He is furious. Whoever has done this to him would pay dearly! No one who messes with Salamander ever gets away lightly. He braces himself to leap out and go after his foes. But no! He remains where he is. Stuck to the chair! What is happening? He tries again to leap. But no! He is still stuck to the chair. The villains seem to have put glue on the chair. He is now in a real sticky situation. In a few hours, his energy would be drained away by the darkness and then the felons would emerge out of the darkness. Would this be the end of the super hero’s glorious saga? Such a tame end to such an illustrious life. What a pity! What a pity!

You vile felons. Did you think you could get rid of Salamander so easily? It is not without reason that he is known as the ultimate warrior of light. He is not done yet. He still has one last trick up his sleeve. Or rather down his mouth. His tongue. His fiery tongue that has got him out of sticky situations in the past. He concentrates hard and gathers all his remaining energy to the tip of his tongue. He then opens his mouth and exhales. A brilliant ball of fire bursts out and the chair catches fire. It would be a matter of minutes! The sticky wooden trap would be reduced to ashes.

The ball hits the chair and it catches fire. The fire starts to eat away at the wood. Little by little the chair is being reduced to cinders. What did they take him for? It took more than a crummy old chair and a bit of cheap glue to do in the fearless fighter for justice. But wait! There is a small problem. The flames having whetted their appetite on the chair now reach out to our hero’s posterior. But then, there is a small problem. The hunger of the flames is insatiable. Having consumed the chair fully, they reach out to that which is stuck to the chair – the superhero’s posterior. Ouch! It hurts! But how is this possible? How could fire hurt its master? To learn the answer, one has to takes a trip down his memory lane.

The scene becomes cloudy and amidst the dense cloud one can make out the form of a ravishing lady in a shiny red flowing gown. She holds a bundle in her hand wrapped in a maroon clothe. She is taking her new born baby to the great temple of the fire God to offer to the sacred flames. She makes the infant sit on the flat of her palm and gently lowers her hands into the urn. In a few minutes she gently draws her hands out from the flame. Her hands are unhurt and so is the little tyke in her arms. His body has a slight reddish glow for the sacred flames have endowed some of their aspect to him, making him Salamander – the master over fire. His body is now completely invulnerable to fire. Well, not entirely! Not his posterior that had been covered by his mother’s palm!

We return to the present time. One little oversight on the part of his mother then was going to prove to be his undoing now! What a tragedy! What a tragedy! Is this fate of all heroes? To pay the price for their mother’s follies! As the flames eat their way through his rear, his eyes begin to close, his mother’s calm serene face the last vision before his consciousness fades away.

There is time. There is hero time. And there is super hero time. So just talking time is meaningless. So, when telling the story of super heroes one does not venture to remark on the magnitude of time that has elapsed. So let us just say certain time passes after hero’s tragic end. It seems like he is not dead after all. There still seems to be some consciousness remaining. He can hear her mellifluous voice calling out to him from a distance as his conscious seems to return again. “Salaman!” “ Son Salaman!“ “My dear son Salaman! ” His mother’s voice seems to be having a miraculous healing effect on him. He opens his eyes. His mother’s face is now clear as a crystal. As is her voice. “Get up, Salman! You need to get ready for school!” She is standing by his bed and shaking him hard.

He must go to school for he is now Salman Dhar, an eleven year old school boy. By the day! By the night, he will be Salamander. The fearless super hero. As he gets up from bed, he still feels the burning sensation from his previous night’s adventures. Or is it the fiery chicken from last night acting up from the inside? He goes into the pot chamber to relieve himself. His posterior is now feeling much better. But the relief is only short lived as there is another worrying matter. Such is the nature of things of this world. One problem does even not fully gets resolved before another one raises its ugly head.

A fate worse than that of Salamander of the night awaits Salman of the day. He had spent the previous night with his uncle at the newly opened mall – at the multiplex watching the latest English super hero movie followed by an even more wonderful time savoring the delicacies at the newly opened fast food restaurant. Needless to say, his homework had got the short shrift. Now the ghost of the forgotten homework was coming back to haunt him. His teacher’s cane would descend upon his vulnerable posterior in all its fire and fury, putting him back again into the discomfiture of the previous night. He is now in a real sticky situation. He ponders how he could get out of it.

Fiery as Salamander’s tongue is Salman’s mind. It starts working on an overdrive and soon a plan emerges. Salman however does not rush in blindly like Salamander. He believes in proceeding slowly and steadily. Acting on his plan, he puts on a tired face and flops down piteously on the chair his head down on the breakfast table. He starts making low whining noises as he sees his mother approach.

“Ma, I am feeling very tired and sleepy. My whole body is paining. I feel so terrible”, he says in a forlorn tone. His mother is worried and returns with a thermometer. She put it into his mouth and returns to the kitchen. The moment her back is turned, he thrusts the thermometer’s bulb into the bowl of breakfast cereal in warm milk. Slowly the mercury begins to rise. It hits 100 by the time he hears his mother’s footsteps. He quickly takes out the thermometer and puts it back into his mouth for his mother to pull out.

Her face takes on a concerned expression as she looks at the reading. “You do seem to be running a temperature. You don’t need to go to school today. I will call up and inform the teacher. Go and lie down!”

His sharp mind and fiery tongue have once again saved the day. He happily tucks himself into bed with one of his favorite super hero comics. The world of super hero comics melds seamlessly into the real world as sweet slumber draws him into her embrace. It is time for the next adventure!
Email Post
Labels: Intriguing Points of View