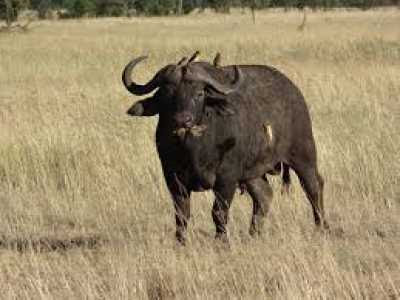 One day God came in my dreams. In the form of a large, dark buffalo. That was grazing merrily. On a Dutch Plain. He lifted his head from the grass and spoke to me.

"You have been taking so many stories from this world. Isn't it time you gave back some to the world as well?"

I pleaded, "I would, my Lord. Indeed I would. If but I had the talent with words."

"All those wisecracks and retorts that you throw away on many a casual occasion without a thought - is that not a way with words?"

"But my Lord, even if I were to write, who would read?"

The buffalo reared on his hind legs and took on a preacher's pose. "To work you have the right, my son, but not to the fruits thereof."  Then he mooed long and deep for no conch shell he had. With that he disappeared and I woke up from my sleep.

Thus having received the word of the Lord, I started a blog in 2008. And on the blog I wrote, I wrote and I wrote. Incessantly I wrote. I wrote humorous narrations of incidents from my life. I shared my views on various topics. I wrote stories; I wrote poetry.  I wrote satires and parodies; I wrote tales, fantastical and fanciful,  of sense and of nonsense.

I was settling into a rhythm of work, life and blog when again Lord Buffalo appeared in my dreams.

"What did I tell you to do and what are you doing, my bull calf?"

"I am only doing as you advised me, oh Lord. I have been writing all this while."

"But is this what I asked you to write?"

"How does that matter, oh God? Am I not writing?"

So from then on I devoted myself diligently to get my stories into books. The doors of many an anthology I went knocking. But just four were the ones that were opened unto me in the four years. Dejected and despondent, I sat brooding and dozed away. I was woken up by the feel of something sharp against my posterior. It was Lord Buffalo. Brandishing his horns at me.

As soon as I saw him I protested volubly. "No, my Lord. This is not fair. This is just not fair. I have been trying so hard to heed your words. But I have only met with failure at every turn. I am giving up, oh Lord."

"What exactly did you do, my little bull calf?"

I poured out my entire tale of woe. Of all the anthologies I had gone seeking. Of all the rich and the famous authors' favors I had tried to win in vain. Of all those wasted words that went unread.

He listened patiently and then turned his rear end towards me. He let drop a load of dung on to the plain. And then disappeared without a trace.
Email Post