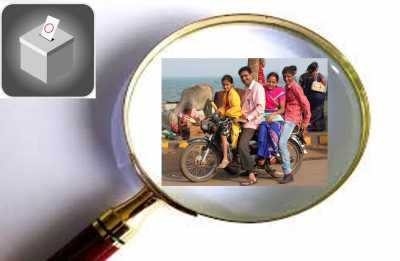 I have always felt the behavior of the educated working middle class in Indian democracy is a paradox of sorts. We are the ones who contribute most to the running of the government. We pay income tax with least default. We spend the most on consumer goods and hence contribute considerably to the sales tax revenue as well. We work for the companies that shell out corporate taxes. So directly or indirectly we seem to be the Atlas on whose shoulders the entire weight of the government rests. Yet we are the ones the government pays least heed to. Despite this blatant unfairness, we seem to be the staunchest defenders of the system. While we do demand lot of reforms, we are the most wary about rocking the boat in any way. We are the most vocal when it comes to cribbing about the functioning of the government. Yet when it comes to voting, we don't seem all that much keen.  I found this all a bit strange and difficult to comprehend.

A deeper introspection on these aberrations made me wonder if possibly the above observations are not an anomaly but a logical consequence of the way the system is designed. I thought it might be interesting to share how I went about thinking through it. Let us assume a simplistic model ignoring factors such as caste, religion, regional feelings, specialized trade groups, lobbies etc. Based on this model, let us try to find the answer to a single critical question. Who needs the government and governance the most? The rich, the poor or the middle class?

The rich by definition have an abundance of wealth. With the money they have, they can hire armed men and acquire weapons to protect themselves. Further they can use the same to protect their interests and indulge in profitable business mowing down anyone who stands in their way. So a powerful government that strictly enforces laws are at best a hindrance to them.

The poor on the other hand live in scarcity. The current system is loaded against them, keeping them pegged down at the very bottom of the pyramid. Satisfaction of every little need is an uphill climb for them. The police and laws hold them back preventing them from running amok indulging in thievery and pilferage. Even begging and prostitution, demeaning though they are, are no option. For they too have been made illegal. As far as the poor are concerned, complete anarchy is any day better than a government that protects status quo.

What about the middle class? Middle class do not have wealth in abundance but don't really want for anything either. They just want to keep what they have and live peacefully. They do not have enough money to have their own private army to protect them. They are desperately in need of an entity to protect them and maintain law and order to allow them to live on in peace. The government happens to be that entity.

Coming back to the middle class, in spite of the corruption and populism, we are able to carry on with our lives. We can go to work, earn money, watch cricket and movies, take vacations and foreign trips, read novels, blog, sleep, eat, marry, have children etc. without any serious hindrance. So obviously we don’t want to rock the boat. That is the reason for our staunch support of the system despite being cognizant of all its evils. All we can do is crib about the unfairness. We know in our heart of hearts that a government has to be populist and corrupt in order to be stable. So ultimately it is Hobson's choice for us. That is why I believe the electoral process fails to excite us.

Let us see how the dynamics work in practice. The poor usually constitute the majority of voters in any average constituency. So the real battle for political parties is to get their votes. There are two ways of doing this. One is through giving them sops. The other is using the 3 Ms - muscle, money and media. Both these require money. That is where the rich come in. So where does that leave the middle class in the equation? We can at best serve to tilt the balance when two opponents are equally poised with majority voters. That ensures we are not completely ignored in governance if we vote and vote en block. But our interests will never be put above those of the rich or the poor. Further even if we vote, we are the ones who overthink and have lot of differences of opinion. So rarely does the middle class vote en block. So the few votes that we have also get divided. That reduces voting to nothing more than a symbolic gesture in support of the governance institutions that middle class need for their survival. Not a prospect that can really excite everyone, eh?

So, are middle class completely helpless? Is there nothing we can do? In the short term, it is indeed so. But in the long term, the problem may have a solution. To look at it we might again have to look into the problem itself. The problem is that the rich have more money and the poor are more in number. So solution is for middle class to increase their wealth or their numbers or both. So how do we do it? Doesn't one go against the other? The obvious way to increase the numbers is to have more children. But if we were to do that, wouldn't we be reducing the wealth per individual, joining the ranks of the poor? Distributing our money to the poor will again have a similar effect.  What remains is to continuously increase our wealth while trying to enable the poor to increase their wealth as well till eventually we have a situation where the wealth is more evenly distributed.

So far so good. But while we go about doing that, will the rich and the political class who are the beneficiaries of the current system sit and watch? Obviously they will not. So there is need to keep them distracted in other issues and put pressure on them from other sources such as the need for maintaining an image in the international comunity. That way all the various social activists and the protesters serve a purpose in the broader scheme of things. Meanwhile middle class should look to see how to reduce the disparities bridging the gap both with ones above them and with the ones below them. The former requires the ones with the entrepreneurial mindset while the latter needs the ones with a more service mindset. Consistent and concerted effort by both kinds of people over decades may bring about necessary change.