Jewel of the Jungle 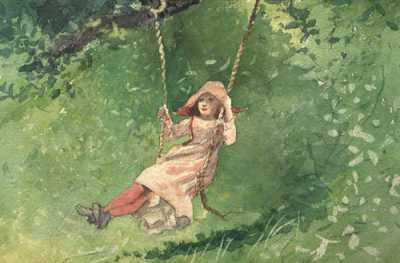 He was in love! With the jewel of the jungle! He was totally spellbound by her enthralling beauty and the mesmerizing tunes of her song. It was truly a heavenly bliss standing still and gazing at the graceful form oscillating to and fro to the rhythm of the crickets' songs on the swing hanging from the large Banyan tree. Her hair glistened like newly formed pearls. Her gown seemed to radiate an aura that no material on earth could possibly produce. Her face shone like the moon. She sang softly and her tunes seemed to resonate with the sounds of the forest - the rustling of the dried leaves, the chirping of the evening birds, the chattering of the monkeys on the trees, the far cry of the lone wolf! The song seemed to have magically fused all these sounds into a single irresistible melody. He wished this moment would last forever. He wanted no food, no drink, no sleep. His father, his mother and even his fiancee, to who he had professed undying love, lay forgotten. The pursuit of his old dreams and ambitions seemed but meaningless toil. All the riches of the world would have been but dirt off the ground to him at this moment. His entire existence had just a single meaning - the beautiful creature on the swing in front of him.

As he stood watching, he remembered the cook's warning. “Sir, there was this beautiful girl, Ragini, in the village many years back. She was betrayed by her lover. Overcome by grief, she committed suicide. They say she has now become a ‘Mohini pisasu’ and lurks in the forest seeking revenge for the wrongs done to her. The village elders say she appears in luminous white with tinkling anklets to entice young men to their doom. They warn young men not to go anywhere near the jungle. You too are well advised to stay away from the jungle, Sir.”

He had brushed aside the warning as mere village superstition. But one tended to start believing things one normally doesn't when stranded all alone in the middle of the jungle in the twilight hours. He however felt no fear; he felt only awe. If she was a ‘Mohini Pisasu’, he would gladly let her take the very last drop of blood that flowed through his veins if she were to just ask for it in her mellifluous voice.

Then the mine supervisor’s words came to his mind.  ”Sir, fifteen years back, a couple from the village had ventured into the forest to collect some herbs taking with them with their one year old baby. They never returned - theirs remains were found few weeks latter. They were probably killed by wild animals  However no trace was ever found of the baby girl. Some say the wolves took her away and brought her up as their own. Some of the miners report seeing a girl riding a wolf. They think it could be the lost baby girl grown up. They talk in hushed whispers of how she has now become the princess of the forest and will brook no trespassers within its precincts.”

"Interesting", he had remarked, disinterestedly then. Now he wondered if the girl in front of him was the wolf girl. She definitely had the regal bearing of a princess.

His mind drifted on to the strangely attired man he had encountered as he entered the jungle. “Beware! Don’t you dare set foot inside our jungle! It is the abode of the Yakshini ‘Mahendri’. She will come down upon you in all her fury and smite you evil men who seek to defile the jungle!”

He had then laughed at the old man who had seemed like a priest or shaman of some sort and had told him to go and get a mental checkup done. The old man’s words did not seem so ludicrous any longer. He wanted to prostrate before this celestial beauty and offer her his worship.

Slowly as the sun faded, the girl’s song seemed to wane and the swing started swinging slower and slower till it finally came to a stop. The girl descended gracefully from the swing and began to walk towards the thicket of trees. “No! Please don’t leave me and go.” A strong protest rose in his mind.

Suddenly his reverie was broken by the sound of a dual volley of shells being fired. He could feel the recoil of the Marlin M444. Hadn’t he come with the purpose of getting his miners rid of the menace that stalked them? She was dangerous. As long as she was alive, the mining operations could not go on. It was his duty to ensure the safety of the miners. She had to be killed. There was no room for sentiments.

The shells had strayed wide off their marks. His shots had been half-hearted. He never really had the intent to kill her. They were more  his way of protesting against her leaving. Though the girl was unscathed, a pall of silence had descended over the entire jungle. She stopped in her tracks,turned around and looked at him briefly for half a minute and then melted away into the night. But that look was something that would remain with him all his life. That hurt look that told him she was deeply disappointed with him. That he had somehow violated her trust. He would regret this day all his life.
Email Post