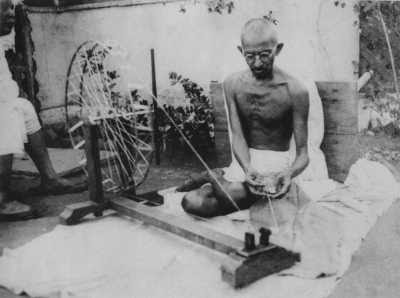 For long time I have been cynical about the greatness of Mahatma Gandhi. I am sure many of my fellow educated Indians would have similar views. No one can summarize the reason for this feeling better than his nemesis Naduram Godse at whose hands he faced death on January 30, 1948, raising him to the status of martyr. However over the years I have begun to develop a better understanding of this man and his message. The experience has been like the peeling of an onion. The layer of Gandhi - the one who got us independence was removed to reveal a stubborn man, with strange ideas who hijacked India's freedom struggle to obtain personal glory. But this layer also gave way to reveal the true Satyagrahi, what he stood for and the greatness of his philosophy.

There are many people who believe India could have attained independence in 1949 even without the intervention of Mr. M.K.Gandhi. That is probably true. It is possible that the firebrand leaders who advocated aggression and violence could have got us independence even earlier.  But what one should think about is whether such independence would have been good for the country. In 1900, Swami Vivekanda had remarked "I can get you independence within 15 days. But where are the men to keep it?" He felt there was a national rot that had lead to weakening of the nation spirit which in turn had lead to repeated invasions by foreign powers. So what was more important was the revival of the national spirit for without it, even if independence were gained, it would be freeing of the body while the spirit was still shackled. That is where Gandhi comes in. He prompted the nation to do some soul searching and revive the spirit of the nation. That was the Sathyagraha - the search for truth. Independence, if obtained, should be on the basis of truth. The way of the extremists was that of might over right. Victory through force of arms is all about which side has the greater strength rather than which side is right. So if a weaker side wins by making itself more powerful, it does not necessarily mean it is on the side of right.

Violence is something very difficult to control. While it can be used to fight off one's oppressors, there is no guarantee that it will go away once its purpose is served. It can very well turn upon a country's own populace or weaker neighbors. That is why he abhorred violence so much. He knew that once unleashed, violence cannot be bottled up again. Take the Chauri Chaurah incident for instance. To some a mob setting a police station on fire may seem a minor pretext to call off the entire non cooperation motion. But not to Gandhi. It showed the him that our people were still ruled by anger and hatred: worse masters than the Britishers. So it was more important to put a stop to it by sending across a strong message that violence was to be abjured at all costs.

Of course there are lot of things which people feel Gandhi did wrong. One was his constant opposition to Subash Chandra Bose and his ideas. But understandably so because Subhas Chandra Bose's way was that of extremism and went against the basic tenets that we mentioned earlier on.  Moreover his willingness to ally with the likes of Hitler and the Japanese Imperialists only went on to show he believed the ends justified the means. How could Gandhi have supported him? Would one be proud to sit across the table with the Nazis and the Japanese soldiers who impaled Filipino babies on their bayonets?

Another point was raised by Godse in his speech on why he killed Gandhi. He asks why Gandhi, during partition, only exhorts Hindus of India to refrain from violence and not the Muslims of Pakistan. And he himself gives the answer as well - only the Hindus of India would have listened to him. The Muslims of Pakistan would not have. So even if he had appealed to them, it would have been to no avail. Only thing he could have done is to let Hindus of India also wreak violence upon the Muslims. But what purpose would that have served? How would that have helped the Hindus in Pakistan?

There are other accusations one may raise against Gandhi. For instance I am sure someone will bring up his constant advocacy of Nehru at the expense of Patel. Then there is the issue of his negligence of his family and his supposedly sexually aberrant behavior with his grand niece.  It may not be possible to defend him on all of these counts. On some such as his sexually aberrant behavior, we lack full information to judge him fairly. While in case of others such as his unduly favoring Nehru, it may not be possible to defend him. But the point is do we need to defend him at all? For the core message of his life to be valid, does he have to be completely perfect in every aspect of his life and entirely Godlike? Do his faults and imperfections in certain areas of his life void his genuine message?

The other line of argument would be that whatever he said was always there in our Hindu Philosophy and he did not discover it afresh. So why should he get the credit? But then we are not discussing about apportioning of credits here. In my opinion, his memories would have been better served if we had hung on to that one central message of his life instead of giving him the epithet of 'Mahatma',and erecting his statues all over the country.  The messages are always more important than the people delivering them. But then we always end up hanging on to the people and forgetting the messages. Buddha spoke against idolatry only to be made an idol of and worshiped post his death. Jesus made a stand against violence only to have his followers fight crusades in his name after his death. Even in the case of Gandhi himself, he advocated a parsimonious living and ended up having his face pasted upon currency notes.

So to conclude, my understanding of the message of Gandhi's life is that the best way to resolve a conflict is through a mutual agreement on the right course of action that is fair to all parties concerned and not basis a trial of strength between the two parties. That is the key take away as far as I am concerned.
Email Post