The strange incident of the boy in the craft class 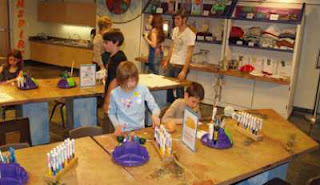 Say you are an eight year old school girl. A good girl who attends classes diligently, listens attentively and pores over every word the teacher says. One day you are sitting in craft class, colored paper and glue on the table in front of you and a pair of scissors in hand intently watching the teacher demonstrate how to create an intricate work of art. Your attention is temporarily distracted by a snipping sound. You turn around and what do you see lying on the seat right next to you? Hair! Lots of hair! Imagine how you would feel in such a situation. How possibly could hair have made its way into the classroom right out of nowhere? Sounds right out of a spooky movie, doesn’t it? This was something that really happened. Close to three decades back. I don’t remember the name of the girl or how exactly she looked except maybe for the shocked expression on her face the moment she saw all the hair around her. But I remember well the boy sitting next to her. An untidy boy in crumpled uniform. For that boy was none other than yours truly.

Anyways let us get back to the girl. She recovers from her shock and notices most of the hair is lying closer to her neighbor. She examines him and finds there is hair all over him. The hair seems to be falling from his head. Hair fall at such a young age? And at such a rapid rate? If it continued to fall like this, he would be bald by the end of the day. The poor boy!

The teacher is puzzled. What is this? She had been always aware of the boy doing strange things. But this is the first time she is hearing of strange things happening to him. But the girl is a studious girl not given to mischief and her voice has an earnest urgency to it. So she rushes towards the boy in question and examines his head. Indeed the hair seems to be falling. But not at such a rate so as to explain the amount of hair lying next to him. Just a few bits of hair stick on to her hand when she touches his head. It is indeed mysterious. Then her eyes fall on the scissors in the boy’s hand. She seizes the scissors from his hand. Indeed it has hair all over it!

The boy’s mother is summoned and the whole story comes out.

The events leading up to this incident had been set rolling a week back. That morning the class teacher had spoken to him quite sternly. “You hair looks like a jungle. You better get it cut this week.”

“But madam, I come to school early in the morning. So there is no time to go to the saloon in the morning and my parents say it is not good to have a haircut late in the evening.”

“Ok then. I give you a week’s time. But do not come into my class next week without having a haircut.”

The boy had forgotten to tell his parents that he needed have a haircut that weekend. So he had landed up in school the next Monday with his hair still looking like a wild bush. On reaching school, he had suddenly remembered and he had become very worried. The class teacher would descend upon him like a thunder storm in all her fury and blast him to smithereens. But the first period was not the class teacher's. Hers was the third period that day after English and Craft. So the boy had decided to seize initiative and remedy matters before the fateful period arrived. Lady Luck had smiled upon him and entrusted a scissors into his hands that day thanks to the craft class. So he had decided to literally take matters into his own hands.

Neither the craft teacher nor the class teacher were too amused by the boy’s initiative. The boy’s mother received an earful from both of them. The mother having had to face humiliation due to the actions of her ward, was in no mood to let the culprit get off lightly.  Being chastised by his mother did not bring matters to an end either. There was still his father to be reckoned with. The boy tried to suggest meekly that since he had been sufficiently punished by the teachers as well as the mother herself, there was possibly no need to call his father’s attention to this little matter. But his mother thought differently. The father, returning home, tired from work, was mortified to learn regarding his son’s inclination towards the hair dressing profession. So much for his dreams of his son becoming an engineer or a doctor! While the mother was free with her hands, the tongue was the father’s weapon of choice. He had a loud voice, which was given extra power by his anger and abuses poured out freely making the boy almost wish he was never born.

The boy was left wondering what wrong he had done. He had meant no mischief. He had only tried to obey his teacher. And while doing that he had even tried to save some of his father’s hard earned money. His methods may have been a bit on the unconventional side. But did he really deserve so much admonition for this? After all his intentions had been good, hadn't they? Maybe that was the world’s way of nipping independent thinking right in the bud and keeping people bound by conventions.
Email Post