Why India can never be friends with Pakistan, China, USA 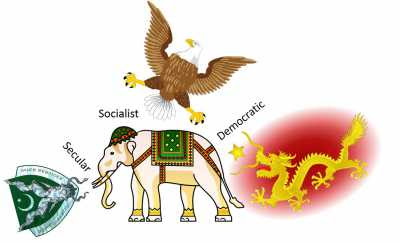 I confine myself to coming up with the hypothesis. I have not attempted to collect data to prove the same as I am not an academic in this field. Anyways even if I were to do that, it would be an academic paper and not a blog post. So here I try to prove using pure logical reasoning based on simple information in public domain why none of Pakistan, China or US can ever be a true friend of India. My whole argument is going to revolve around a single line from the preamble to India’s constitution that defines India as a sovereign socialist secular democratic republic. It is my submission that each of these words is a reason why at a conceptual level India can never be truly aligned with one of the three above mentioned nations.

Let us start with ‘secular’. This explains why I believe Pakistan can never be our friend - as it was founded on the premise that life of Indian Muslims would be better under an Islamic Republic than in a Hindu majority secular nation. While the words secular and Islamic were not formally there at the time of founding of both the nations, I believe it was always there in the spirit of the two nations. So for Pakistan to accept and acknowledge that Indian Muslims can have a better life in a secular nation where Muslims are a minority would be an existential crisis of sorts. In fact I believe it would be easier for Pakistan to deal with a Hindu Rashtra as that would vindicate its founding belief that Indian Muslims and Indian Hindus are two different nations.

Let us move on to ‘democratic’. China obviously does not believe in democracy. So success of democracy in its neighborhood would undermine the ideal of single party system being the best for peace and prosperity of a nation. If Chinese people feel Indians enjoy as much or greater prosperity with added freedom, then there might be clamoring for switching over to democracy in China as well. Therefore I feel it is not in the interest of the Chinese establishment to have a prosperous India in its neighborhood. Of course in short term, India might serve its purpose in terms of trade and China might not overtly go to war with India. But China, in my opinion, will never truly want India to ever be a peaceful, prosperous, stable nation.

Lastly we come to ‘socialist’. America, as we know is the flag bearer of  capitalism. So they would not be too excited about success of socialism anywhere in the world, especially after the collapse of the USSR. We can clearly see, as we have started moving away from socialism and towards capitalism post liberalization, our relations with USA have improved drastically. As long as we move towards capitalism we would have the backing of Wall Street that is running US from behind the scenes. But if we were to find ourselves moving back towards socialistic ideals, we would find capitalistic forces line up against us.

Therefore it is my belief that China and Pakistan will always be India’s enemies while US will never become a true friend unless there is a major change in the nature of government in any of the four nations.

To some my conclusion would seem all too obvious while others may debate based on specific details of how one or the other nations has made friendly overtures to India or point out cases where nations with opposing philosophies have co-existed peacefully. To the first, I would say, it probably is but I was more fascinated by the whole logical thinking process of arriving at this conclusion starting with a simple statement and constructing a chain of logical arguments thereon. The second kind I would not be able to counter unless I take the comprehensive exercise of collecting data and running rigorous analysis to test my hypothesis.
Email Post