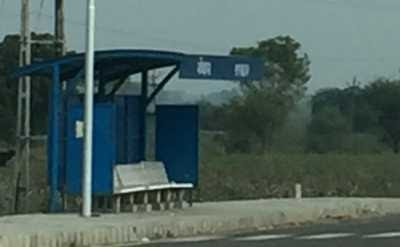 The sun was blazing away in all its fury. The wind was trying to compete with the sun, blowing its top swirling dust all over. The rocks however just held their ground completely oblivious of the efforts of the sun and the wind. And like the rocks, was the lone man waiting at the bus stand – calm and unperturbed. His long matted hair and beard made it difficult to guess his age. The lack of grey hairs indicated he was probably less than 50 years of age. The dirt and grime made any attempt to deduce the color of his shirt abortive. His Dhoti had however somehow managed to withstand the grime better. A cloth bag hung from his shoulders. No bus seemed to be in sight. But he seemed in no hurry.

Artik had always been a quite boy engrossed in his own thoughts. His blank face had baffled most of his teachers. After trying to bring him out of his shell, the teachers had given up on him. He hardly ever spoke to the other boys in the class. If they asked him something, he always had a short to the point answer ready. It was in fact a school joke that it was impossible to get more than two words out of him. One of the girls in class had taken a dare to get him to speak more than 2 words to her. She had explained the bet to him and asked him to help her win the bet. He had listened to her calmly and walked off with the words, “You lose”. His behavior could have easily given people reasons to doubt the state of his mental development if not for the fact that he effortlessly topped the class. All the time. In all the subjects.

Divya Murthy was very excited. The emotions of joy and pride emanating from her face served to accentuate the delicate lines of her pretty face. Her husband was going to receive one of the country’s highest civilian awards – the Padma Bhushan. She imagined herself in Delhi with him at the award function sitting among some of the most distinguished people in the country. More than the award function, she looked forward to the party later on that was being thrown to honor her husband. She wondered who all she would meet there. She imagined herself dressed in her new evening gown and diamond necklace basking in her husband’s reflected glory. She was so proud to be married to the man who had discovered the cure for cancer. He had told her that not only had he discovered the most effective cure but manufacturing cost was so low that even the janitor would be able to afford it. Like small pox and polio, cancer was soon going to be eradicated, he had told her.

The sun had done its work for the day and was on the wane. The wind had also blown itself out and the dust was settling. But the rocks still stood on. So did the lone man in the bus stand. Neither of them seemed to have even noticed the change in behavior of the sun and the wind. However while the rocks were still standing, the man had made himself comfortable on the bus stand floor. He was pulling out a few moldy bread slices from his bag and consuming it with the relish of a king sampling royal delicacies. Having taken a good 1 hour to finish the 4 slices he serenely walked up to the hand pump near the bus stand. Time had come for the next item to emerge out of the magic bag. This time it was a battered bowl. Having filled the bowl with water, it was as if his majesty was now savoring the choicest wines after his repast. Probably the bus had left early morning itself and would come again the next morning only.

The only class where Artik showed any signs of interest was the scriptures class taken by Brother Selvaraj the school principal. He would pour in on every detail about the life of Jesus. He would not say much in class but he would follow his principal to his room after the class on Friday evening and have lengthy discussion with him. Brother Selvaraj was very pleased with this boy. He could see another Brother in the making. So he devoted extra attention to the boy and tried to guide him along the path of God. This was Artik’s last year of school. After finishing schooling any boy who was interested could apply to join the monastic order. He was looking forward to the day he would take Artik to the head of the local diocese to be formally inducted as an apprentice. Artik’s thoughts were not too different either . He had already begun to develop distaste for worldly pleasures and was looking forward to walk the way of God.

Divya was fuming with rage. The pout on her lips and her fiery eyes were bringing out a different aspect of her beauty . Her mother-in-law would be accompanying them to the award ceremony. How could her husband do this to her? Life was so unfair. This was like clipping her wings off. She would have to drape herself in a Sari and stay close to her mother-in-law all the time. She would not be able to try out any poultry or wine at the party. Nor would she be allowed to dance. She no longer desired to attend the function any more. Suddenly the door bell rang. It was Dr.Murthy her husband, the wet blanket, the spoil sport, the insensitive clod. “So all set to attend the function? Ready with all your new clothes and jewels, darling?” he called out merrily as he entered. The sadist was sprinkling salt on her wounds. “Yes. I have got the black dress for mourning ready. And I don’t need any jewels for mourning. The function is only going to be like a morgue for me if I have to attend with your mom ”

The sun had completely gone out. The wind had completely died down. It was calm and one could faintly hear the singing of crickets. Still nothing had affected the rocks nor had anything the man at the bus stand. He had stretched himself on the floor and lost in deep slumber without a care in life. It was now the feasting time for mosquitoes that seemed to be enjoying his blood. But what were mosquitoes to a man for who even the sun and wind were non entities? The bag was lying nearby unattended. If there were any humans in the nearby area, it was very unlikely anyone would be interested in stealing a mangy old bag with some tattered clothes and a battered bowl inside. So he could probably sleep on peacefully like a baby till he was woken up by the bus.

Divya and her mother-in-law were no longer on opposite sides. They were now both united by a common cause and were looking ferocious like wild cats. Dr. Murty had been offered a deal for his cancer drug by one of the world’s largest pharmaceutical corporations. They had offered him an astronomical figure that would have ensured he would have counted among the richest in the country and have enough money for seven generations to sit and eat. But this brainless man had gone and given away the patents to World health organization free of charge to manufacture the drug cheap and supply free to all the vermin on the street. How could he be so selfish? Just because he wanted to be famous as a benefactor of mankind, he was denying his family the comfortable life they deserved. These two women had no use of a husband or a son like that. He had deeply disappointed them and hurt them.

Brother Selvaraj was very disappointed with Artik. The boy had chickened out at the last moment. Instead of opting for the diocese, he had opted for the entrance exams to country’s top biosciences college. How come he had not seen this coming? He could have sensed something was amiss the moment he had come to known the boy had been reading some works by Hindu mystics and saints. Instead taking this as a positive sign, Brother Selvaraj had encouraged him.He had especially got carried away by one poem called ‘Song of the Sanyasin’ by Swami Vivekananda and began to show more inclination towards the life of a wandering mendicant rather than the orderly life of a Catholic monk. It did not stop here but had taken a different turn and for the worse. He had developed cold feet at the last minute and had decided he would neither be ordained catholic monk nor a wandering monk but lead a worldly life. His mother’s happiness was of at most importance to him and he wanted to do something for mankind at large he had said . So he would earn wealth, marry and lead a normal life to make his mother happy and work towards scientific breakthroughs that could lead to betterment of mankind.

The sun was gently sprinkling its warmth on and the wind was gently caressing the rocks, the road and the bus stand.. The rocks however seemed to pay no heed to the sun or the wind. Nor did the man sleeping on the bus stand floor seem to. The man who had formerly been Dr. Artik Murthy had at last found his true vocation in life. He had tried his best to make his mother happy and make the world a better place. But he had now realized the futility of his efforts. But he had not left without a final gesture towards mankind and his family. He had given humanity a great gift – the gift of life to thousands. And to his mom and his wife, he had left a reasonable fortune. After all wasn’t money all they wanted? Let them have it. Now he wanted to live for himself. He was now experiencing an unearthly peace and calm he had never experienced as Artik the student or Dr. Murthy the bio-scientist. His life was now on song – the song of the Sanyasin. The sleeping man gently got up as the long awaited bus finally arrived.
Email Post