The Battle of Symbols 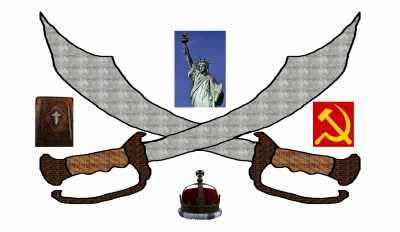 Few years back, a cartoonist was arrested for insulting India’s national emblem. There was lot of outrage regarding curtailing of freedom of expression and people being over sensitive about trivial issues. It got me thinking whether things were as simple as that. Or were there deeper forces at work?

That got me thinking about the meaning of these symbols and why people are so sensitive about them. Symbols seemed to me a simplistic representation of what binds together a group of people be it a nation, a religion or an ideology. Also it occurred to me that anthems, songs, myths, legends and larger than life heroes were symbols of sorts.

Taking a step back, I see humans initially existing as dispersed individuals who stayed together due to the opportunistic need to hunt and forage together and protect themselves from predators. With time, the unity began to yield benefits and more and more people had to be brought together. Beyond a point the self- interest could not suffice. Often it required individuals or sub groups of individuals to sacrifice their self-interest for the greater good of the group as a whole. So a social engineering was needed to grind into the minds of the people how the group was more important than the individual. So it was critical to create the strong group identity. Probably that is why all the various symbols were created to forge that emotional bond of the individual with the group.

As humans became more connected, there arose the possibility to form larger groups. But there is probably a critical mass of size beyond which group loyalty might be difficult to sustain. Sub groups might start competing for the individuals’ loyalty within the large group. And same persons’ loyalty might be claimed by different groups. With human life becoming complex, so many different facets of an individual have emerged– social, political, economic, professional, religious to name a few. There would be tendency to form groups based on each of these and people have to decide which takes precedence when loyalties clash. The ones with higher loyalty and the opportunistic ones benefiting through assuming leadership of the groups will try their best to drive passion and protect the symbols of their respective groups. Other groups or people seeking to restore individualism would seek to deride the symbols of the different groups to weaken the bond that hold the people within those groups. The ones wanting to hold the group together will try to depict these attacks as personal attacks on every individual belonging to the group and try to unite them even more strongly in a shared sense of victim-hood. From there on any attack on the symbols is open declaration of war and provocation of violence.


This is what I could come up from first principles. I am sure sociologists and political scientists would have more elegant theories. But I am able to more or less explain most of the things I see in the world with my own crude hypothesis. For instance Islamic insurgency across the world  -  I see as a clash between loyalty to the Ummah and individual national loyalties. The communists also talk of uniting the workers of the world, establishing their loyalty more towards communism than to individual nations. That is why often communists are suspected of being anti national. However in cases where religion or an ideology like communism becomes part of a national identity, they serve to reinforce nationalism rather than oppose it. But wherever nationalism is enforced by association with a religion or ideology, it probably creates an ethical dilemma for citizens not subscribing to the ideology or religion. That probably is one of the causes for tension in most parts of the world.

Similarly in India, the way I see it – the Congress and BJP are trying to establish the Indian identity in different manners. Congress sees India as the continuation of destiny of the people in the region who won a two hundred year Independence struggle against the British. So their symbolism and icons are all related to the independence struggle. On the other hand the BJP see India as the land of the glorious Hindu civilization dating back to three thousand years. So accordingly for them, the definition of Indian identity will revolve around Hindu religion. That way it is a war of symbols going on at a subtle level involving things such as writing and rewriting history books and shifting national narratives with the changing tide of political fortunes reminiscent of George Orwell’s iconic novel ‘1984’.

Then of course there are the left liberals who value individualism more than any group identity. So they probably seek to destroy symbolism of all sorts in the long run. But in the short run, they seem to have adopted the Machiavellian strategy of joining hands with the weaker groups to fight strongest one.

So on and so forth various battles of symbols rage on. I do not think they can be trivialized as simple acts of intolerance over minor matters. In my opinion, they are actually serious battles of ideologies to decide what groups will survive and what will fall by the way side.
Email Post