Education for the Twenty First Century 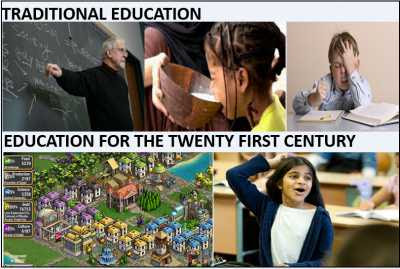 As I am prone to do often, one day I was sitting and musing how I could have made it much bigger in life if but I had put that bit of extra effort during my student days. As I sat day dreaming, a part of my mind  took the shape of the  Ghost of the Christmas past from Charles Dickens' Christmas Carol and appeared in front to me to take me on a journey to my past.

The first scene was me sitting in the Chemistry class at school. I magically enter my own mind. It is struggling to soar high into the clouds. It wants to leap and to bound and go on a flight of fantasy. But the body keeps it shackled which in turn is shackled by the demands of the educational system. The mind tries hard to pull away. But the body stays rooted to the desk holding the mind a prisoner along with it.  Since it is anyways stuck here, I feebly suggest to the mind that it focus on the professor’s sonorous voice. No! The mind rejects my entreaties. To all external appearances I appear to be sitting calmly trying to concentrate on the professor’s words. But inside my head a battle is raging. It is a clash of the Titans. Finally both contestants are so dead tired that they decide to call a temporary truce to rest and recoup.

“You there!” I am jolted awake as a piece of chalk hits me.

“Can you please repeat to the class what I was just explaining?” I look around confused.

The whole class breaks into laughter. Am I the idiot of the class?

The ghost is back again and leads me on to the next scene: this time at home. My room! In front of my books. I am trying to read a chapter on the Sahara desert in my geography book. The chapter is so dry and arid it would have put even the desert it is trying to describe to shame. I try hard to focus. But the whole experience is like climbing the smooth face of a rock. There seems to be no crevice or projection I can hold on to and for every few inches I climb up, I fall back an equal number if not more only for the reason that I have already hit the hard ground and can't go down any further. This is sheer torture, a self immolation of sorts. I can’t take it anymore. I put down the book and switch on the television.

The ghost once again makes its appearance. I am still in the same room but have gone ahead a few months forward in time - it is the day of the final exam. I am filled with remorse. I am reminded of the story of the ant and the grasshopper. I had been the lazy grasshopper throughout the term that was the summer and spring. Now the winter has arrived. The diligent ants have built a reserve of knowledge for the next day’s exam. Within one evening I have to frantically scamper around gathering whatever shreds of knowledge I can find to sail me through the dreaded exam.

This was a journey through my school days. If the ghost had instead lead me through my engineering days, the back drop would have changed as would the subjects but basic situation would have remained exactly the same. Again if we had gone on further to the days of my MBA by when I would supposedly have grown more matured, one would have hardly found much difference in the way things shaped up. I wondered why I was destined to repeat that sordid piece of history of my life over and over again as if I was stuck in a time loop. Was there no breaking away from this viscous loop?

I know it is always easy to blame external causes for one's own shortcomings. But then I could not figure what  my shortcomings were. There was never a lack of intent - I had always wanted to work hard and excel in my academics. In terms of aptitude too, I cannot say I was found lacking. Despite all my challenges, when the system put its final seal of accreditation upon me, I was graded above average at the very least. So in some way an external observer may even view me as one of the successes of the system. But as I have mentioned earlier my personal experiences tell a different story. So I would not be crying sour grapes if I were to say the system is flawed.

Having come to the conclusion, I decided to trace my way to the root of the problem.  I tried to understand why it was that I could not maintain my attention in the classroom or apply myself to my text books. The two key reasons that came to my mind were an inability to relate to the subject matter and insufficient participation in the learning process. Let us consider each of these separately.

I decided to take the issue of lack of interest in subject matter and dwell one level deeper. Why was I not interested in the subject matter? Because it was knowledge I did not need. Many of the subjects on which knowledge was being thrust upon me seemed as esoteric to me as a thesis on the mating habits of brown spotted toads. Now looking back I feel probably they were useful subjects after all. But no effort I feel was made to make me feel the need. It was more like knowledge being forcibly pushed into my head whether I wanted it or not. If I did not internalize the knowledge and demonstrate having done the same on my exam papers, I would be penalized. Hardly inspiring, is it?

On the issue of active participation, the words of one of my better teachers comes to my mind. "My success as a teacher lies not in teaching you anything but making you learn." Some might ask what is the difference. The first is spoon feeding while in the second student feels his way around and finds his way. In my case I always found it much more interesting to struggle and find my way than things being directly taught to me. When things were directly thought, I tended more often than not to get bored or forget whatever I learnt.

All that is fine one may ask but then how do we do this practically. In the earlier times, this was achieved by apprenticeship of a student to a master craftsman. But that would be very limited learning in a specific craft and not give the broad based learning.  So how does one make a student understand the need and give a practical environment to experiment and learn in broad based subjects? We probably may not have had the answers few years back. But now we have the answer - technology. Why not create simulated environments through which students have to navigate their way using the knowledge on different topics?Wouldn't that be much more interesting as well as make students understand application of various subjects in practical situations?

What I am saying might sound like stuff of science fiction to some. But we are very much there already in terms of technological infrastructure. I have actually experienced this kind of learning. I learned more about geography and business from playing the game rail road tycoon than any text book. I learned more history from the games civilization, Caesar and Pharaoh. Physics would have probably helped out in Angry Birds. I am sure games can be made where each and every subject can find some use in order to win. I strongly feel computer game like simulations are the way to go for education systems of the future rather than the age old pedagogy of books and lectures and exams.
Email Post