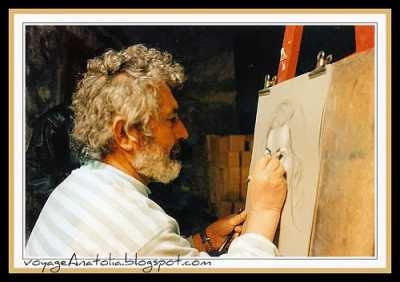 Loser! The one word that describes fifty eight years of my existence! My entire life has been an exercise in futility. Failures! Failures! More failures! That is what I have seen all these years. I should have listened to my father and taken up that job he wanted me to take up. But no! I wanted to go chasing after fleeting dreams of grandiose! What has it got me? Nothing but frustration! My brothers are all well settled today – they have their own cozy homes, caring families and respect in their limited social circles. And me? What have I come to? I am just a drunken old man living all alone in this dingy little studio. I don’t even have money to buy myself a proper suit. And respect? Even fellow artists smirk when I talk of my coming masterpiece. As far as the others go, even my own brothers’ wives wrinkle their nose when I come near their home.

The only thing that brings some cheer to my life is the company of starry eyed young artists. It is so wonderful to see the excited ones with the fire still alive and blazing. It brings back to me memories of my own younger days. My hope, dreams, my aspirations! Maybe it is their fire that still keeps a small spark alive in my heart. That I may yet attain that elusive blaze of glory before my days are done! But then it brings its own frustrations. I have seen so many of them broken by the harsh realities of life and following me on my path of doom. I almost feel like bending them over my knee and sending them back home with a sore backside and sound advice – the kind my father had given me. But my father’s words had bounced off me like water off a duck’s back. I suspect my words would not have too different an effect on these young ones. At that age, your dreams are an opiate: an obsession that blinds you from everything else and consumes you from within. Only thing I can do for them is offer them some words of succor to lighten their arduous journey through the world of art. At least some purpose for this useless existence!

Right now two young girls have taken residence at the studio facing mine. They are so full of life and hope and I so love visiting them. Thank God for the small mercies! They also seem to be fond of me. They listen patiently to all my banter and they are some of the very few people who actually seem to believe in my coming masterpiece. In fact they seem to have greater faith in my abilities than I myself have! They listen with eyes open and pore over every word I say on art as if I was some Van Gogh or Rafael lecturing them on finding their muse. They always have a penny or two for my drink when I don’t make enough from my few commercial scrawls. The other day this girl Joan scolded me for drinking too much and beseeched me so earnestly to cut down my drinking and take greater care of my health. It almost seemed as if my existence mattered to someone!

Sometimes life conspires to deny us even our tiny pleasures. It was a bolt from the blue when one day Susan told me that Joan was dying. She had been down with pneumonia for some days. It seemed the fever had got to her mind and she was feeling she would die soon. The doctor had apparently told that her chances of survival were low unless she has a strong will to live. I immediately went to her bedside and tried talking some spirit into her. But when has any good ever coming of talking? She just would not listen. She seemed to have developed some strange fancy and was rooted to that. There was this ivy plant growing on the wall of a building facing their window. She kept looking at it intently all the time. It was winter and its leaves were falling. Every falling leaf, Joan felt, took her closer to death and she would die when the last leaf fell off. It was just impossible to convince her that the ivy plant had nothing to do with her life.

I was very worried. I stood near the ivy plant and surveyed it. There were just four to five leaves remaining. With the strong winds and rains these days, the leaves would not even last the night. Even as I was watching a couple of them were swept away. If the last one fell of, Joan would not survive. I had to do something. I could not let her die!

Suddenly I saw the curtain in the girls’ window closing. Within minutes, a strong gust blew and the remaining few leaves fell off and a bare creeper leaned against the wall. No! This could not be happening! Susan cannot keep the curtain closed for ever. The moment she opened the curtain again, she would be writing Joan’s death sentence. I had to do something. But what could I do. Then suddenly an idea struck me.

I went into my studio and came out with a ladder. I leaned the ladder on the wall and went to get my palette, my paints and my brushes. I climbed on to the wall and started painting. I was like a man possessed. Some strange force seemed to have taken control of my hands as I painted, striving to recreate that last leaf.

Then suddenly it started raining. All the paint would be washed away and my effort would be in vain. I could not let that happen. I rushed to get an umbrella. I held the umbrella in one hand and the brush in the other and continued to paint. The rain grew heavier and the cold wind cut into me like a knife. But I held on fiercely for my dear Joan. Today I felt more alive than I had ever felt all my life. I felt in me strength to stand against the whole world. Finally I was done with my work. I stopped and looked at my creation. It indeed looked like a real leaf. I hoped it looked real enough for Joan too. The rains continued unabated through the night. But I would not let the rains take away my gift to Joan. I hung on protecting it with my umbrella.

I do not know when the rain stopped. But the next thing I knew I found myself in my bed with my lungs heavily congested and too weak to even get up. Susan was by my side with a bowl of hot broth. I looked up at her. She understood the unasked question in my eyes.

“Joan is all right. She is still too weak to come and see you but she is on her path to recovery. You saved her. That leaf was indeed a masterpiece. She still thinks that the leaf is real. I will tell her of your masterpiece once she is fully convalescent.”

I felt a glow of pride and joy. I had saved her life! I had won. I had won! I had fought and won! I had finally created my masterpiece! I was a winner. I closed my eyes and could hear Susan’s voice drifting away into the distance. And then silence: complete pin drop silence!