Asterix and the Digital Empire 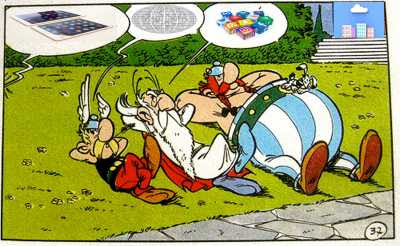 “Why is the village looking so deserted? Where is everyone gone?”

“Don’t you know, Obelix? The entire village has gone digital.”

“What the hell is that? Is it some kind of kind of dangerous disease? Can’t Getafix cure them?”

“It is all those cursed little boxes supplied by that bloody Phoenician merchant.”

“How can something so little be so dangerous?”

The little man led the large man to one of the huts. They knocked at the door once. They knocked again. But no one opened. Then the huge giant swung his arm. The door burst open with a crash. Inside sat an old man in a corner and a pretty young woman in another corner the eyes of each glued into a little box they held in their hands.

Obelix walked up to her and tried to peer into the box. “Don’t disturb me, you big oaf. Can’t you see I am busy checking out the latest Lutetian fashions? Do you want me to fall behind that vile Impedimenta?”

He backed away and tried to look into old Geriatrix’s box. The man gave him a wink. “Psst! See here. Nice, isn’t it?” Obelix peered into see pictures of winsome lasses displayed on the box.

“What the hell is this?”

“Hush. She will hear.” He proceeded to intently leer into the box.

“Let us go and find our leader Vitalstatistix. He will surely be able to do something.”

“No, Obelix. That would be of no use. He has abdicated from his life here and taken up a second life inside the little box. He says the people in the game listen to his orders – nobody in the village ever does.”

“Surely Impedimenta would be able to knock some sense into him.”

“If only she herself were free from the nonsense on social media and chat rooms. She is happier discussing with her Roman counterparts about the number of husbands Roman court women have had and baby showers of pregnant theater artists.”

“This is serious. We should seek the help of Getafix the druid.”

As they walked towards the druid’s hut, they noticed Fulliautomatix on the way. Various brand new tools lay around him. He was intently tapping on the little box. Asterix hailed him.

“Can’t you see I am busy, Asterix? I need to complete writing about the features of the latest bellow and anvil I have received for product review,” he growled.

Soon they were at the hut of Getafix and what did they find there? An old man with a white beard was intently staring at the little box. “Et Tu, Getafix?”

The old druif looked up from his box and shrugged. “Well, I am left with no choice. All traditional sources of my potion ingredients have dried up. Only way to get them is to actively trade on the commodity markets.”

“Everyone’s gone crazy, Asterix. I am really sick. Let us go into the jungle and have a good hunt.”

“Sorry to disappoint you, Obelix. But there are no longer any boars in the jungle.”

“What happened to them?”

“The boars have gone digital. You can no longer hunt them. You can only order them through the BoarPanda App.”

“Damn! Let us go and find at least a Roman garrison and collect some helmets.”

Asterix shook his head. “Roman legionaries have gone digital too. Nowadays only drones patrol outposts and the soldiers operate them from control rooms in Rome.”

“This is so terrible. Are the pirates at least still there or have they gone digital too?”

“They are there but they have joined the Galley for Sure service and if we treat them badly they will give us a bad user rating. Then no galley will ever pick us up.”

As they walked through the empty jungles, they heard a familiar voice in the distance like the yowling of a hundred cats in pain. “Ah! At least Cacofonix is still the same. Let us go and have a word with him.”

As they approached the tree from where the singing was emanating, they noticed the bard holding one of the small boxes in reverse pointed towards himself as he sang.

“In the village no one appreciates me. So I am vlogging my songs live for the benefit of a more appreciative audience across the world. “

Obelix peered into the small screen and saw the bard in the display. He was thoughtful through the entire way back. Then he suddenly exclaimed, “I have an idea!”

Atserix looked at him quizzically as he continued. “If Cacofonix can find fans on the internet, why not me?”

To Asterix’s dismay, suddenly Obelix gave a whoop and picked up one of the little boxes still remaining in the crate and began to click pictures of himself and Dogmatix in different places and poses making duck faces, pig faces and monkey faces. Obelix had discovered the selfie. Asterix knew he was now a lost cause.

Asterix resigned himself to his fate and went and slumped down at the cross road hand over his head. As he sat worrying, he heard a sigh next to him. He turned around to see a tall man in toga, a laurel wreath over his head.

“I am no longer Caesar. Now I am loser. That fellow Zuckerburgeus has ruined me. Now all roads no longer lead to Rome. They all lead to the evil book of faces. And the one face that matters - that of Caesar has no value any more. No one uses any denarii anymore. It is all mobile wallets. “

“You were the one who went and stuck the Digital Rome deal with him.”

“And I rue that cursed day.”

“Maybe we can still remedy things.”

Caesar looked up hopefully. Asterix quickly laid out his plan. Caesar nodded, a smile on his face and jumped on to his horse. Asterix took out his last bit of magic potion, took a swig and they set out to wreak havoc pulling down the cables and towers of evil.
Email Post