Asterix and the Great Demonetization 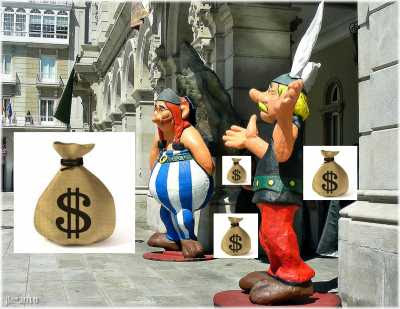 One fine summer morning in Gaul

“Did you notice, Obelix? The Romans have been acting funny these days.”

“What is funny, Asterix? I have never had such a wonderful time in my life ever. It as if there’s been a windfall of Romans.”

“That is the problems. I have never seen Romans so eager to get beaten up. Something must be brewing.”

“You think the Romans have got the recipe for our magic potion?”

“I mean figuratively. They are up to some tricks. I have not seen even the pirates show such suicidal tendencies. We must report this to Chief Vitalstatistix.”

Soon the whole village was gathered for a banquet. The chief got up to address the village. “This month is the most important one in the glorious history of Gaul. We bashed up more Romans in this month alone than in an entire decade. We have set a record in the sport of Roman bashing.”

His announcement was followed by loud applause.

“But, chief. I find this sudden upsurge in population of Roman soldiers unsettling. Something must be underway.”

“You and your suspicions, Asterix. Your pessimism is becoming intolerable.”

“Enough, Asterix. Another word from you and you will take Cacophonix’s place.”

Asterix’s eyes shifted towards the village bard in colorful clothes lying gagged, bound to a tree, his hands and legs tied up, his harp lying next to him.” He decided it was best to keep his peace.

Once the banquet ended, an elderly man with a long white beard accosted him. “I think you are right, Asterix. I think the Romans are up to something. There has been so much demand for magic potion these days. I am unable to keep up. I am sure the Romans will sneak up on us one day when we have no potion handy.”

“I agree, Getafix. I with go along with Obelix to Rome tomorrow to investigate.

Next Day in Rome

People were standing in a long line extending all the way to the city gates. Everyone was holding huge bags, cans and vats. Asterix walked up to one of them.

“What is happening, Sir? Is Caesar giving out some free gifts to his subjects?”

“I am new to this city, Sir. Why are you all standing in this queue?”

“Demon what? Is Caesar summoning demons or something?”

“Far worse - demonetization. Caesar has asked us all to render unto Caesar what is Caesar’s.”

Asterix looked at Obelix. “These Romans are crazy,” Obelix replied. Asterix could not but agree. He decided to find someone else.

An old man was sitting in a corner his hands over his head. “Why are you looking so sad, grandpa?”

“Caesar has stolen all my life time savings.”

“Has he fallen that low? Looting his own citizens! I thought Cesar’s citizens are above all covetous intentions. Seems like now he is doing in Rome what Romans do everywhere else.”

The old man shook his head sadly. They realized they could not get anything more from him. They soon came upon a regiment of soldiers marching listlessly their heads drooping. Obelix gave a whoop of joy. Astrix held out a restraining hand.

The centurion replied curtly, “Shut up, soldier and fall back in line. If soldiers do not go to the Gauls, the Gauls must come to the soldiers. This at least saves us the long trudge up the arduous marshes, hills and jungles.”

They lined up in front of the two and stood meekly. Asterix and Obelix stood staring at them blankly for a few minutes. Then the centurion spoke up, “Don’t prolong the agony. Be done with your thing and move on. We don’t have all day.”

Asterix knitted his eyebrows. “You want to be beaten up? Why?”

“Caesar’s orders. Now get on with it.”

“So that he can tell the citizens how bravely his soldiers suffer at the hands of the barbaric Gauls for the glory of  the Roman empire while they are complaining just for standing in a line for a week. Now give us the whack!”

Obelix had had enough. He waded through the soldiers and knocked every one of them out and collected the helmets.

“This is no fun at all. They have all gone soft. Like tomatoes gone stale. We need to find better ones.”

Asterix had a puzzled expression on his face. “It is clear why the soldiers are coming and lining up to get thrashed. But still I don’t understand this demonetization stuff.”

The soldiers of course were in no position to answer for knocked out men tell no tales. They decided to move on. Two ladies could be heard loudly. Asterix moved a bit closer to listen to their conversation.

“Do you know, Livia, it is rumored that Cleopatra is behind all this demonetization.”

“Cleopatra? Where did she come into all this? I know Caesar and Anthony are behind her. But why is she behind demonetization?”

“Well – apparently she did not like how Caesar looked in the old coins. It seems they did not do justice to his majestic figure. So she wanted new ones made that showed him in better light. And hence all this demonetization.”

They had heard enough. It was time to return home.

“You don’t love me at all, Vitalstatistix. Have you ever announced demonetization for my sake?”

“But Impedimenta darling, we don’t use money at all in our village.”

“You and your lame excuses. You just don’t love me!”

Soon all the women of the village joined in the chorus.

All the women of the village cheered him and preparations started for their next grand banquet.
Email Post