Asterix and the Surgical Strikes 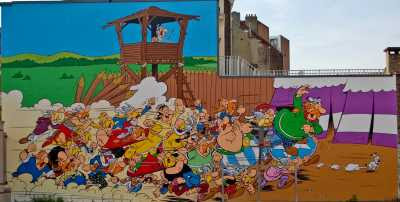 In a Small Village in Gaul

“Did you hear about the surgical strike?”

“Surgical strike? What is that? I don’t think any such thing could have happened without my knowledge. I would have known if somebody had ordered a surgical knife from my husband.”

The third woman, a comely woman with a turned up nose spoke up. “I knew it all along. It is a ploy by Vitalstatistix to prevent my husband Geriatrix from challenging him for the chieftain’s position.”

“Are you questioning the integrity of Asterix?”

“I mean…. Asterix has rendered useful service to the village so many times.”

The plump woman who had been quiet so far spoke up. “But why does Asterix have to steal the glory all the time? My husband Unhygienix should have lead this mission. After all he has so much experience in surgery. “

“You calling his gutting of the stale fish surgery? Come on…”

“Our fish is not stale.”

“All of you stop fighting. This is not the time for your minor squabbles.” A new woman had joined them.

She continued. “We are holding a banquet tonight to celebrate this most glorious occasion in the history of Gaul. You are all invited to join?”

“Of course the success of the surgical strike ordered by my husband.”

“Your husband? What did he do? It was Asterix who did the strike.”

“When did I ever say anything against Asterix?”

“Yeah, you are only gunning for my husband Vitalstatistix always, aren’t you?”

“And you always want to ride the success of other Gauls to blow your husband’s trumpet, don’t you?”

Suddenly she found her hair tugged hard to which she responded in kind. The other two tried to intervene only to have their hair literally torn apart by combatants. And in the blink of an eye, a two way contest took a four way turn.

“You mind your own business, Fulliautomatix, you sycophant!”

“Keep your sharp tongue for your old man, lady!”

Suddenly he felt a hard blow on his shin. “How dare you speak like that to my wife?”

“You always turn up everywhere like a foul smell, don’t you, Geriatrix?”

“Who said foul smell? You better not be talking about my fish.”

Meanwhile in Rome…….
“What do I hear? The Gauls have stuck a blow right in the heart of Roman territory?”

“Speak up, men! Couldn’t the entire might of Rome stand up against two Gauls!”

“No! I do not want to hear about magic potions again.”

“But Caesar, the good part is this time we took minimum casualties.”

“Isn’t that even worse? It means you gave up without a fight. I am going to have you all decimated.”

“Lend me your ears, Caesar!”

“And my laurel wreath as well?”

“No Caesar! How can you say this of me? Not that I love you less, but I love Rome more!”

“Ok, whatever! Cut the dramatics and spill it out.”

“We can turn the lack of Roman casualties to our advantage.”

Encouraged by Caesar’s silence and keen look, he continued on, “Let us call out the town criers and have them declare that no strike ever happened. They will go all over the towns and cities and villages declaring no such strike happened.”

A slight smile emerged at the end of Caesar’s lip. “Yes! That might just work. Send out for the announcers! History is written by victors. So we shall conquer and emerge victorious by writing history. Veni! Vidi! Vici! ”

A scene in the middle of the sea…..
“The Gauls are celebrating the surgical strike!”

“But Romans are saying no such strike happened.”

“But we did get bashed up by that fat oaf. Isn’t that why we escaped back into the sea?”

“We get bashed up all the time. No one ever called it surgical strike before.”

“You are right. I am so confused now. If the Gauls are celebrating, it must definitely be something more than a routine bash up.”

“Maybe it has not happened yet. Maybe they are celebrating in anticipation of the strike!”

“No! I hope not. This anticipation is killing me! I can’t take it. Let us just drown our galley and be done with it. At least that way we deny them the chance to claim they did a surgical strike on us.”

“I think we have enough boars for the banquet tonight”

“Can’t we just pick up just a couple more? You know, in case we run short!” The large man gave the little man a sly wink.

“Not even a teeny weeny one? A surgical strike in the jungle!”

“You and surgical strike, Obelix?”

“Why? You think I can’t be subtle? See how delicately I uproot this tree. “One heave and a tree that had stood for centuries found itself flying through the air.

“Ok! Ok! I get the point, Obelix. Anyways we did the surgical strike together. But no more boars. We have had enough surgical strikes for the day. If we do any in the jungle, the boars will go on strike in protest.”

The large man sighed. “You never let me express my natural self, Asterix. You are such a control freak. The surgical strike was fun and all but I wish you had let me bash up all those Roman legionaries. And now you are not letting me take any more of the boars.”

“Stop boring me, Obelix. We are getting late for the banquet. Let us be on our way.”
Email Post