Rapunzel - The Reality behind the Fiction 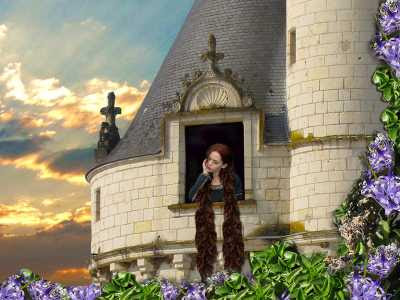 She had received a mail that she had won the first prize in the “Write a Hair Raising Tale” contest.
This was her first win in a blogging contest and she was so excited. The bell rang. Had the gift reached her already? No. It can’t be. She knew that these contest guys were always tardy. It would take at least a month for her gift to reach her. She opened the door and was greeted by one of the strangest looking men she had ever seen. He was wrapped in a tattered brown cloak, his hair was uncombed and his sallow face was unshaven. She wondered if he had escaped from some lunatic asylum.

He held out a bottle to her. “Here is your prize, ma’am!”

She looked surprised. “This is it? This is the prize for the“Hair Raising Tale” Contest?”

She felt so disappointed. She had dreamed of an iPad or at least a Samsung Galaxy Tab. But instead all she was getting was a bottle with dark yellow liquid from this shabby man? Now she knew why she had won ahead of all those regular winners.

He seemed to have read what was going on in her head. “Do you know what this is?”
She shook her head.

“This is Mother Gothel’s original concoction for rich hair. Even after thousand years none of your companies have been able to match this in spite of throwing millions of dollars on research. Any of your companies would kill to have this formula in their hands.”

Her blank face clearly showed incomprehension. She looked at him curiously. “Mother Gothel?”

She shook her head. She always thought Marie Curie was the first woman scientist. Who was this Mother Gothel?

He continued, “I understand. The church conspiracy has been so deep that even after thousand years she has been denied her rightful place. But at least let me do my bit to do justice to her.”

He paused for a while and looked at her intently. “Mother Gothel was a Christian Nun of the thirteenth century who got disillusioned with the prejudices of the church and broke free to chart her own path. She was declared a heretic and hounded by the church authorities all her life. She bravely faced all the problems and against all odds made some important scientific discoveries.”

“What did she discover?”

He brandished the bottle of oil. “This. The ultimate hair care formula.”

Involuntarily her lips twisted into a smirk. “That’s it?”

“How can you trivialize such an important discovery? Do you realize how much hair care is important to mankind? Otherwise would all these wise companies be spending so much money on this? If they had spent all this money on medical research, they might have even found a cure for cancer by now. But then health is not everything, is it?”

She was about to protest. Then she remembered how many blogger contests had been held related to hair and how many she herself had participated in. Entire blog-o-sphere was abuzz with articles on hair care. Maybe hair care had an important place in human civilization after all. Then suddenly a new though stuck her.

“Isn’t Mother Gothel the name of the witch in the Rapunzel story?”

His face became grave. “See. How much they have defamed the good woman. They label anyone who does not accept their dogmas a witch and burn them on a stake.”

“But she was so cruel to Rapunzel,” she protested.

“What is cruelty, dear? Do you know how many rats and monkeys are killed in the current day scientific labs in the name of research? And finally who gets the credit? The researcher or the company paying! Everyone forgets the monkey or the rat! But see in this case everyone has forgotten the researcher and they remember Rapunzel. And she was not even killed. Didn’t she live happily ever after in the end?”

“But she was locked up in the tower since childhood,” she said weakly.

“Yes. But all her needs were taken care of. A thief’s daughter brought up like a princess. I agree it was not entirely kind to isolate her from the world. But some sacrifices have to be made for the cause of science. But she was more than adequately compensated. Who knows her knave of a father would not have sold her off to a whorehouse if she had remained with him?”

She was now thoroughly confused. But she was still not willing to give up without a fight. “But how do you justify the vindictiveness on discovery of Rapunzel’s romance?”

“Where is the vindictiveness here? The moment Rapunzel said she had other plans, she let her go. But isn't it fair that she take Rapunzel’s hair? It was after all the work of her life time? How could she just let her take away the outcome of her lifetime of research just like that?”

“But she blinded the prince.”

“It was just an act of self-preservation. She did not want him revealing her hideout to the church authorities. Rapunzel did not know the route outside. So she just blindfolded and took her out and left her in the middle of the forest. But the prince knew the route. So the only way to prevent him from leading the church authorities to her was to blind him. So as you see there was never any needless cruelty.”

Her mind finally caved in and she felt a grudging respect for the fearless scientist who had fought her way through obstacles to discover the greatest gift to mankind. She extended her hand and took the bottle from the man and looked at it admiringly.
Email Post
Labels: Fairy Tales Retelling