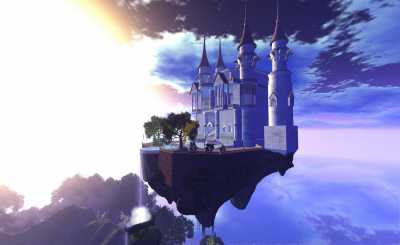 Fuel prices were rising and threatening to put paid to all hopes of India's aspirations of becoming a super power. That was when the delegation from Laputa, the land of the air castles made contact with the Indian government. They met with the prime minister who welcomed them with bear hugs that left them completely overwhelmed. But they also did not lag in magnanimity. They had for him an offer he could not refuse - a complete path breaking engine technology - to be made by the Laputans as part of the 'Make in India' initiative. And what more - with 80% of the money invested by Laputa as a loan to India at -1% interest rate. The prime minister immediately called his cabinet to discuss the proposal and approvals were obtained. In the next week, the Laputans had the contract and in the week after the scientists from Laputa arrived in India.

The Laputan scientists got down to the task at once. They were very meticulous and task focused. They wanted to take a holistic approach and went about meeting historians, sociologists, economists, religious leaders and eminent people from various other fields. Soon two months passed. The government’s Laputan engineers were out with an impressive looking report. The report was too large to be reproduced here. So a brief summary of the ten alternatives suggested by them is presented below.

Horse power engine – Horses were mankind’s first means of transport and till 100 years back had been one of the most important means of transport. There is no reason why horses cannot once again come to man’s aid. We of course are not suggesting a return to the days of horse drawn carriages. Rather we have designed special treadmills on which horses will run day and night to produce energy which will be stored on cells that will be used to power automobiles.


Mouse power engine – No true scientist would fail to acknowledge the contribution of mice to the advancements in the field of medical science. Mice can also be the salvation from the fuel hike crisis as well. We have designed special wheels with mice inside them. The mice will keep running in circles within the wheel, getting nowhere whereas the car will go places. Mice breed so fast that there will never be any shortages or price hikes.

Beggar's Wish Engine – The ancients have said “If wishes were horses, beggars would ride.” The ancients apparently had technology to transform beggars’ wishes into horses. We are trying to look through ancient texts to unravel this technology. We are hopeful that we will be able to convert beggar’s wishes into cans of fuel. India has so many beggars that you will soon overtake Gulf countries as world’s leading producer of fuel.

Dishonesty Repulsion Engine – This is based on the magnetic principle that opposite poles repels each other. We have tried to isolate a substance that gets repelled by dishonesty. This will be placed inside the core of the engine. The minute a person sits inside the car, the engine will push on ahead by the power of repulsion. Of course this technology might not generate sufficient power for people who are not dishonest enough. But then our surveys indicate the ones having maximum transport needs are politicians and business men. We are sure they will have no challenges using this technology.

Gossip engine – One of the principles to generate power is to confine a fast expanding material to a small space. These opposing forces will generate energy to power automobiles. And what spreads faster than rumors. We are planning to capture rumors and confine it inside the engine. Gossip is a clean renewable natural resource in this country that will not run out in the next 10 centuries to come. So your energy needs will be secured for long time.

Outsourced commutation – India has benefited a lot from outsourcing. It is time India itself does some outsourcing. All offices can outsource the commutation to work to the sub Saharan countries. These countries have efficient runners who can cover the 10-15 Km on foot itself that company employees travel to work on a daily basis. Moreover they can do it in half the time that cars take in the roads crowded with traffic.

Genetic engine – Genetic technology has been taking leaps and bounds. It is time genetics combines with mechanics. We have come up with a prototype of a live car that can run on food instead of fuel. We have come up with an innovative solution for protection from the rising food prices as well. In the day time the car will run like cars normally do. In the night, it will go around the streets scavenging dustbins for leftover food and catching pests such as mice and cockroaches for food. So the car serves a dual purpose as pest eradicator as well.

Reverse engine – We did a detailed study of the transport patterns. Most of the people come back to the same place they started in the morning at the end of the day. So the net displacement is zero. Hence by the law of conservation of energy net energy spent should also be zero. We are using this principle to design an engine that will give back the energy spent in going to a place when you are returning back. This energy can be used for next day’s travel and so one is assured of lifelong supply of fuel unless one decided not to return home.

So the report was submitted. The government established a committee to examine the feasibility of these recommendations. The committee worked diligently for 5 years going through each one of the recommendations. Meanwhile elections came and a new government came to power. They established a new committee to oversee the work of the first committee. The new committee is still examining the report. But all is well..... Till the Laputan arrive to call in their loan.
Email Post