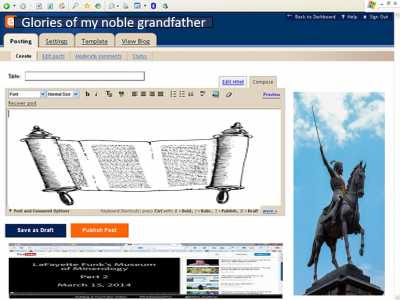 There was this time when I conceived upon an idea to pay a tribute to our grandfather. What is so great about a grandfather you may ask. After all everyone has one. Well, my grandfather is unlike any others – he was one who towered over his fellow men like a colossus. So that Sunday I called together all my uncles, aunts and cousins to my home to make the announcement.

I could see a couple of them yawning. I sometimes wonder if some of them really belong to my family. I strongly suspect they may have been adopted. Anyways I continued on.

“I seek to write this blog post in honor of our grandfather. It is going to be the longest one ever written. I called up the folks at the Guinness Book of Records and checked. The longest one written so far is of 10,000 words length. I plan to write it 11,000 words long.”

“But that will take hours and hours to write.”

There you go. You have not even started describing your grand projects and one of these naysayers pop up.

“But who can afford to spend that much time?”

“What about your job, your family and other activities?”

Details! Details! I don’t know why people are like this. You point out the moon to them and they start examining your finger for flaws. I don’t blame them. It is this modern education I blame for developing such shortsightedness.

“I have it all planned out to the minutest detail. I spend 2000 hours a year at work. I spend 1000 hours for my home and family, 125 hours on my other writing projects and 120 hours for reading, friends and hobbies. This 100 hours is way less than what I have allotted for all other things.”

“But still 100 hours writing a single post? You could do so much more in that time.”

What a bunch of losers! And such ingrates. Do they even think what we would have been without our grandfather?

“Then what did you mean? You think I can’t understand what goes on within that head of yours? You keep reading the biographies of all kind of people, don’t you? That is a very productive use of time. But if somebody wants to write one for your own grandfather, that is a waste of time!”

“Now, now! Don’t pick on him. We only mean well for you. Last year how you complained about the paucity of time! You even missed most of the family functions. So we were wondering how you would manage time.”

“If there is a will there is a way. You know how our grandfather came into this town with nothing but two pairs of clothes and from there managed to establish himself as the most respected man in town. As his successors, don’t we at least owe him this much? See, we are a total of 30 children and grandchildren. Divide 100 hours by 30 – you hardly get 3 hours. Divide that over an entire year. It is hardly a minute. So the time it takes to write this post is not even what it takes each of us to yawn. Doesn’t each one of us even owe the great man the time it takes to yawn?”

Ha! This had them completely stumped! They never saw it this way, did they?

“Well, we were thinking about the utility value of a blog post. You know blog posts don’t even sell in shops like books. They don’t win any Bookers and Pulitzers.”

Phew! Give them enough time and they think up a new line of attack. Snakes! A complete brood of snakes. That’s what they are.

“Utility? Don’t you realize that once people realize it is the longest blog post ever written, they will flock by droves to read it? It will get so much traffic that my blog will catapult to greatness. The whole world will come to know about our family and its achievements. And it is not just a blog. There is going to be so many other features such as images, videos and background music. It will be completely mind blowing.

“But what is so unique about being the longest? Anyone can spend time and write an even longer one. And images, videos etc. are typical stuff. What is so mind blowing about all that?”

Now that the cousins are done, the uncles had to start. Neither do they do anything nor do they allow the younger generation to do anything.

“They can. But nobody will. Isn’t that the whole point? These 100 hours I am spending is the dedication I am making to our grandfather. The longer the post the greater tribute we are paying to this great man. The whole world will stand in awe at the magnificence of the tribute we have paid him.”

“But don’t you think we would be paying a greater tribute to our grandfather by trying to keep the various initiatives started by him running successfully?”

Complete silence greeted me. Doesn’t even one person have anything positive to say? Either they criticize or remain silent. I sometimes wish India had implemented a strict one child policy from the time of our grandfather. Then I would not have had to put up with all these cousins and uncles. None of them love grandfather at all. If this post had been about one of the university professors, they would have been gushing all over about it. Because university professors are cool. But grandfather? No. He is not cool. How can an uneducated fellow like him be cool enough for them?

And that cousin who asked all that questions. Nobody says a thing to that wastrel. He writes 3 blog posts a week. That would be like 200 hours a year  – way more than what I plan to spend. Still nobody says a word to him. Why? Because he writes on social causes. Random social causes matter but grandfather doesn’t. Anyways that is how the world is. Let me send them all away and start working on my blog post.
Email Post