Soloman Kane and the Medusa Curse 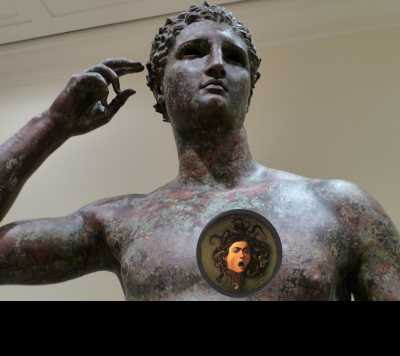 “This upstart thinks he is the new God of love. And it almost seems as if he is. The girls are all so crazy over him.”

“Calm down, son! And tell your mother everything right from the beginning.”

Eros poured out his entire tale of woe to his mother Aphrodite. Solomon was a theater artist who had made his debut with the iconic play “I made love.” From thereon he had gone on to do more plays - “Are you my Brother’s Keeper?”, “Stone Blossoms” and “The Stud”. With every passing play his popularity had been growing by leaps and bounds. All the girls were totally charmed with his melting puppy eyes and were laughing themselves silly over his feeble jokes and childish pranks. He was becoming the new icon of love and the God of love feared being displaced from his position.

“This is nothing new for us, my dear. Many of these earthly beings forget themselves and try to raise themselves to the levels of Gods and Goddesses. We have shown every one of them their place as we will this new lover boy.”

“I want to make him pay dearly for his audacity, mother.”

“Do you remember Medusa, dear?”

A smile lit up on Eros’ face.

A comely lass came rushing towards him and flung herself into his arms. After passing his hands over various regions of her anatomy, he loosened his grip and stepped aside to pull out his sweaty shirt. The anticipation in the girl’s eyes to feast themselves upon his ripping muscles and well-toned abdomen was unmistakable.

But the moment his naked skin came into view, the admiration and anticipation turned into horror. Like in a trance she walked towards him, pulled out the belt from around his waist and began to whip herself with it.

But she went on whipping herself and red welts began to appear all over her exposed skin. He snatched the belt from her.

“What are you doing?”

The front door was open and there stood one of his theater colleagues Roy of the Obers.

“Is this how you abuse one of our fellow colleagues, Solomon? I never thought this of you.”

Her trance broken, she ran into the newcomer’s arms and he led her away. The whole incident had scared her so much that she began to avoid Solomon. Whenever he tried to approach her or Roy to explain, they raised the alarm. The story of him being caught mistreating his lover had spread all over town and people were turning against him.

One of the things he liked to do when he was upset was to go for a ride in the woods. That had such a soothing effect on him. He decided to take a ride to forget all the worries over his lover’s puzzling behavior.

The woods were lovely, dark and deep. But it was summer and the sun too beat on relentlessly, its rays cutting their way relentlessly through the canopy of trees. He was sweating profusely and his shirt had become wet and sticking close to his body. He decided to pull out his shirt to make himself more comfortable.

The moment he pulled out his shirt, a couple of black buck deer that were strolling leisurely in the vicinity, stopped in their tracks as if turned to stone. Then right in front of his eyes, they impaled themselves on their antlers and fell dead. Before he could recover from the shock of what he had seen, he was surrounded by the king’s guards.

Everyone refused to believe his story. He was accused for hunting in the king’s forests and was thrown in prison like a common criminal. His luck was going from bad to worse. But all was not lost. The king happened to be a patron of theater and arts. So in view of Solomon’s exemplary services towards the cause of development of arts in the kingdom, he decided to issue a royal pardon.

Though he was a free man, his popularity had now dipped to its nadir. If we walked on the streets, people just shrank away like cockroaches into their holes when a dark room was lit. His fellow actors avoided him like plague. No playwrights came up to him new play offers.

He too began to confine himself to his quarters, spending his time brooding over his fate. Why had this happened to him? To one such as him with heart of the purest gold! He decided to lie low and avoid coming in public view. Maybe with time everything would blow over and he would regain his place in the people's hearts. After all they were human as was he. And short public memory was the essence of being human.

The next few days passed by uneventfully. Then one day he was overcome by a desire to go on a ride around the city. He decided to do the tour in the night when the streets would be empty. That way he wouldn’t have to face the hostile crowds.

As he rode through the streets old memories flooded his mind. The days when his chariot passed through the busy streets and how everyone would throng around it to catch a glimpse of him. He would then take off his shirt and wave to them and the girls would go into hysterical shrieking. Oh  for those days! If but just one more time he could experience such a moment. Still lost in those dreams, he had pulled of his shirt and waving to the empty streets.

Before he knew what was happening, two men in ragged clothes emerged out of nowhere and fell in front of the chariot’s wheels.

“Stop! Stop!” he yelled. But it was too late. The heavy wooden wheels had rolled over the two of them and instantly relieved them of their earthly miseries. Now he would be blamed for this too. And this time it was murder. What was he to do? The faulty was in his stars.

“That was a master stroke, my dear son. You have made the Gods proud. Even Athena could not have thought of something so diabolical.”

Eros had a contented smile like a cat that had had its fill of cream.

“I got the idea from your mention of Medusa, mother. I just improvised upon it."
Email Post