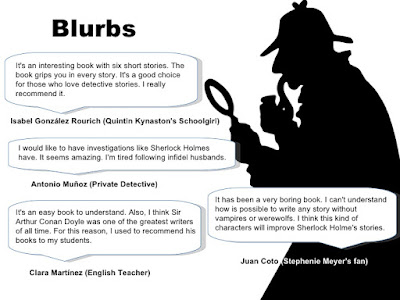 In my seventh post on the road to publication, I am going to talk about the blurb. Actually, I had never heard of this term till I got into writing. So for the uninitiated, it is that stuff written on the reverse side of paperback books. In Tamil, there is this saying that one handful of rice is enough to judge if the pot of rice is cooked or not. On a similar vein, all a discerning reader needs to judge a book is the blurb. And no one ever said don’t judge a book by its blurb. So, you get how important this blurb thingy is, don’t you?

So, one needs to really think hard to come up with an attractive blurb. A blurb is your calling card, your elevator pitch. It has to be crisp, catchy and a truly representative of the work. Even many good writers get intimidated by the importance of these few lines. Some just want to quickly skirt through it by writing something very generic. Some go over the top and fill it with adjectives. Still others go all hyper and load it with questions to intrigue the reader. Then there are those who make it a brief statement of purpose telling what the reader can expect to gain from the book.

So, with the cover ready and editing underway, it was time for me to undertake this onerous task of writing a blurb. Luckily, I had experience of writing blurbs having had to write one every time my story got picked for an anthology as well as having written one for my self-published novella. But here I had to write a single blurb for my entire collection of short stories. So where was I to start? How do I go about writing it?

After long moments of staring at the blank wall. this is what I came up with the first time around.

“Life is not fair. Even in fairy tales. The prince and princess may have what is called a fairy tale ending. But what about all those other characters? The footman, the maid, the friend, the city official, the horse and so many other people and animals who appear briefly in the story and disappear without a trace! Weren’t they heroes of their own stories? Don’t they deserve a happy ending too? Were these stories fair to them? And even with the prince and the princess, were things how they seemed? Did they really live happily ever after? Such questions and more are explored in these retellings of seven popular fairy tales – those behind the scene stories that were not told.”

Nice, isn't it?  No need to go to all diplomatic. Let me myself admit it isn't. This is where writer’s circles come in handy. While not even a handful will have time to beta read your entire book, blurbs are something people can read and give feedback on. Lot of issues came to light when I asked around for feedback in writer groups – too preachy, too boring, not capturing the full essence of the stories, not giving sufficient flavor of my writing to name a few.

So I took another shy trying to do a mini story and give a flavor of my writing as well without giving away much from the stories in the book as such. So, this is how it came out.

“The knight vanquished the vile dragon and rescued the damsel in distress. And then they married and lived happily ever after...” But but but…. what if the dragon was not vile at all? After all it did not even harm the damsel. And what makes knight a good husband? Just because he could kill a dragon that scared her? By that logic a rat catcher would be a good husband because he can kill a rat that scares her. Maybe this story is just an example of the narratives humans fabricate to justify encroachment into wild spaces and exploitations of the creatures of the wild. Such are the themes of unfairness the seven retellings of popular fairy tales in this book explores.”

A bit better. But still not quite there, is it? Following issues were pointed out, too many questions, still not catchy enough, doesn’t give a peep into the actual stories in the book. From here I kept making draft after draft after draft, each one bringing some new feedback, some taking you two steps forward some two steps back. Some of my fellow writers re-wrote it for me. But I could not take it as it is - I had to make the words my own. It underwent a host of changes and came and landed here, finally:-

“An evil dragon. A damsel in distress. A concerned father seeking a savior. A hero galloping off to the rescue – a knight in shining armor. Now THAT is stuff of fairy tales.

But what if the father’s real concern is for the dragon’s hoard; What if the damsel’s reason of distress is the marriage proposal by her pompous savior; and what if the story is told by the horse who bears not only the overweight knight but also his heavy, shining armor all the way to the dragon’s lair and back, facing certain death in the process?

What if there was more – much more – to all your favourite fairy tales than meets the eye?

This book chronicles not one but seven such unfairy tales – tales told by undead horsemen and living cities. Tales of mistreated hobgoblins and misunderstood magicians. Tales of disagreeable frogs and distressed mice. And bears baring their souls. Once you read these stories, you will never be able to look at a fairy tale the same way ever again.”

So finally, a blurb that seemed to have it all. Starts on an interesting note and leads the reader on to the book. Tells exactly what to expect in the book. The language and tone kind of gives a sample of what is inside the book. So, I was pretty happy with what came out. But the readers are the final judge. Is this blurb going to collaborate with the cover and get me more readers or all of them going to sink together into obscurity? Jan 5th, the day of the release will bring me face to face with reality. Till then I keep my fingers crossed