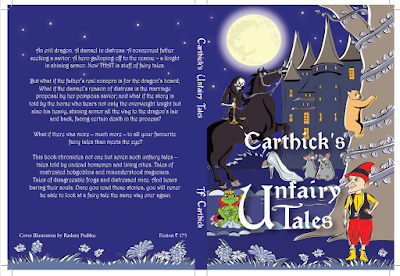 This post is part of my series on my foray into self publishing and it is not. I will write a detailed post on my various promotional efforts. One of the things I did was a pre-release launch event in auspices of  FWBA (For Writers  By Authors) and Litventure. I have been closely associated with the people who run these groups for close to 3 years. While generally I have kept off names and specific details in my series, here I need to express gratitude for help rendered to a first time author. So I would like to mention Neil D'Silva, Vanita Bodke, Kavita Singh and Varun Prabhu who organized this event for me. As part of the event, I announced a contest to write something inspired by my cover. I wanted to make a cover that intrigues readers and make them curious enough to pick up my book. Through this contest I wanted to gauge what kind of ideas this cover inspired in the minds of the people seeing it. It was interesting to read the various entries. Sharing the two that won the prizes.

It was the day of the wedding of the Prince to his chosen bride. Only the mice, who saw all that went on in the Kingdom through their vast underground network of tunnels, knew that the ‘chosen bride’ was no Princess but a scullery-maid with a fortunate size in slippers.

The wedding triggered an ancient curse that doomed the Kingdom. The horseman of the Apocalypse descended upon the realm, blighting the crops and killing the livestock.

A hungry bear climbed the tallest tree in the woods in search of honey. Instead of food, he found an Imp stretched out on a high branch. The imp, curious, asked the bear what had befallen the Kingdom that bears were now climbing where only birds ventured.

The Imp had been quite fond of a weaver’s daughter who had become the Queen of this realm fifty years ago. He decided he would try to help, for her sake.

The Imp sought out the mice, for he knew an old musical friend of his had brought the mice that had once infested Hamlein to live here. They quickly told him the story of the glass slipper, and the imp was once more brought to remember the weaver’s daughter. Her marriage to the King of the time had also triggered a plague, but they had sold the gold he had woven – before he faked his own death – and bought enough food to tide over the crisis. Was this something about royalty marrying commoners? But then why was this plague so much worse than the last time?

As they walked to the lake, they saw a crowned Frog sitting on a water-lily.

Now that was odd. Not the Frog speaking, for animals frequently spoke to Imps, but the fact that he knew the Imp’s name.

‘My grandmother told me the story of the imp who helped her when I was a child – before I was cursed to become a frog and replaced by that wicked magician who took my form.’

So both the Prince and his bride were commoners! No wonder the plague was worse!

‘Mouse,’ said the Imp, ‘Gather an army of rats and squeak at the Princess until she runs out screaming and jumps into the lake. Frog, you can kiss her and resume your true form once the Bear fishes her out of the lake – and claim it was you who rescued her?’

‘Sounds suspiciously like what The Little Mermaid did. But fine, I’ll do it.’

The plan worked to perfection.

With the true Prince restored, the plague faded away. He ruled wisely and well and duly married a Princess from a neighbouring Kingdom.

Cinderella returned to her cottage and married a wealthy miller.

The mice continued to rule the underground realm, and the bear returned to his home to find that the serial house-breaker Goldilocks had eaten all his honey again.

As for the imp, well, he returned to wherever it is imps come from.

In a distant land, where the ruins of once living castle sighed in resonance with the waning moon, two friends met after a long time. Fofnal was the head of the mice clan while Dagul was a spy for other animals who tried to infiltrate the kingdom of mice.

“Beautiful, isn’t it?” Dagul said as he looked at the castle in reverie.

“Deadly, eh?” Dagul tilted his head while twitching his whiskers.

“Don’t you know the legend of Thrunfir?”

“No? What is that?” Dagul replied.

“According to the legend, Thrunfir was a lazy Goblin. Each night he would look at the moon and every night when the sky was marked with the absence of the moon, he would want to know its whereabouts. One day, he went to the Great Castle to meet the Queen's totem Frog, who happened to be a Magi. In the court, he went and asked the Magi for a magical pair of shoes that would grant him the opportunity to travel all over the universe. Of course, what he really wanted was to know where moon hid every month. So, the wise Frog Magi who sensed something suspicious gave him a pair of shoes and warned Thrunfir that once worn, these shoes could never be taken off. Thrunfir thanked the Frog and left. On the night of next new moon, he wore the shoes and the minute he wore them, his body morphed into skeleton in a black cloak. The lower half of his body was horse-like, so he could travel the universe on his feet. What he didn’t realise rightaway was that the shoes were cursed and wearing them had turned him into the grimreaper.” Fofnal replied.

“The word is that he is still out there traveling the universe, killing everyone that comes his way, whether a human or a bear. That is why they say that New moons are the time of death– because Thrunfir, the grim is weeping for the moon and is berserk. He kills more people on that day.”

The winter chill made Dagul quiver, or maybe, it was the legend his childhood friend and king had just told him.

“How are the things at the Paw court?” Fofnal inquired about the Cat Kingdom, sensing his friend's unease.

“Things are under control. Their head is a goof, you know.!”

A twig behind the bushes snapped. They jumped and saw that a pair of cat eyes prying them. At one glance they knew that there end was near and talking about Thrunfir had jinxed them!

If reading the story of how this book came to be interests you to buy the book, you can find the e-book and paperback on international markets out here. myBook.to/Unfairy_Tales (This is not a link to a shady site. This will take you to Amazon page based of your country). Paperbacks in India can be bought out here. http://www.pustakmandi.com/Carthicks-Unfairy-Tales-T-F-Carthick