From the Writer's Desk to the Editor's Desk 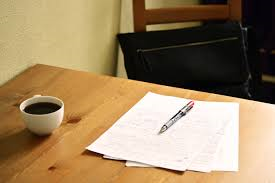 In this sixth post on my journey to ‘Carthick’s Unfairy Tales’, I will talk about a very important element – editing. Editing is a term in writer parlance similar to strategy in corporate parlance. It gets thrown around in every conversation and nobody really knows what they are talking about. Editing means different things to different people. You have one school of thought that say a book needs 5 different kind of editors – Beta reader, Developmental editor, Fact checker, Copy editor, Line Editor and Proof reader. When a new writer hears of this, he is totally bewildered. He wonders if he is writing a book or producing a film with so many technicians. And one even wonders whether the story is one’s own after so many people have been through with it. And a self-publishing author is totally clueless how he is going to afford all these people. It seems like a definite route to bankruptcy and ensuring a lifetime of corporate skulduggery to make good the losses on that one dream book. Then we have the self-help is best help school of thought. Do it all yourself they say. Who knows your work better than you? Read up some nice grammar and editing books and just do it. You know William Stunk’ Elements of Style and all that.

So here I was with my first draft ready and wondering what to do next. Of course, I had this gentleman, who had come to me one fine day out of nowhere and told me I was destined to be a writer and I must rise out of the corporate swamp and seize my destiny. Every one of my stories necessarily required his stamp of approval before I was satisfied it was not something more suited to the finer sensibilities of canines and swine. But question was if the story was ready once he has given his blessings. Or did I need to go looking for the rest of the battery of editors? That was the dilemma. In my past published works, there had been comments on quality of editing, mainly referring to proof reading. So, I had to get someone to do thorough copy editing and proof reading. The gentleman himself was the obvious first chance. But he excused himself on the grounds that his age prevented him from undertaking such an onerous task requiring high level of meticulousness. So now I had to find someone else. Just finding anyone was not difficult – I had at least half a dozen editors as my friends on social media. But the challenge was that I apparently had something my mentor called a ‘style’ which involved use of unconventional language. So, I needed an editor who wouldn’t throw out the baby with the bathwater and make the writing completely bland and standardized. So this editor I was looking for had to be someone who had sufficient appreciation of my writing style to recognize the elements that added to its appeal and at the same time, a perfect command over the language to weed out things that hampered reading experience.

It clearly had to be someone who knew me and not a mercenary editor who edited for money. I happened to mention this problem to one of the persons I had the lucky chance of making acquaintance of during my foray into social media. And to my surprise, he offered his own services. I never even knew he was into this. He was one of the most respected writers in our circles and considered an authority on the English language. And he did have an appreciation of my writing. He had already beta read my stories and had given positive feedback. That way, all of a sudden, an end seemed to be in sight for my editor woes. I still had apprehensions though about how it would go having never done this before.

We agreed on a price and started out. I did a round of thorough self proof read and submitted the manuscript to him. After a couple of days, he asked whether we could do the edits one story at a time. This was a challenge for me as working days are hectic for me and I would not be able to do the changes suggested by him and get back on time and the process could drag on for weeks. So, he decided to do all of them in one go itself. By the following weekend I received the document, with all the suggestions marked out. As soon as I saw the kind of feedback he had given, I was completely reassured. Every single thing he said made sense and I could feel my writing was getting the polish it required. This was apparently the copy writing round and next was the proof-read round. Here, he himself made the changes with track changes on and all I had to was read and approve. After that he wanted to take a final look. I thought it was almost done but he came back with yet another round of edits – this time targeting some of the unconventional elements he felt might not gel well with the readers and could be mistaken for errors or lazy writing. Thus, I got three complete edits. And what more – this editor said he was happy with the quality of my work and so would offer me a discount on the price. I have never heard of such things before – people only find reasons to increase prices. Whoever has heard of someone decreasing prices?

After he was done, I went back to my mentor to look through the document for any minor errors that still remained. He went through it and came back with a bunch of his own feedback. I was surprised to see so many items coming up after all these edits. But he reassured me that it was mostly things to improve style. After having done with his changes, I loaded the manuscript on to my kindle and read it like a proper book to do my own final round of proof read. I could still find things to correct. I almost began to feel this would never end. I thought of getting one more proof read done by someone else. But I had done enough and I was sick of this by then and just wanted to get it out. I told myself that the skill of an artist lies in knowing when to stop and decided to freeze the manuscript and go ahead with the next steps.

So that was the story of the edits. A completely pleasant experience overall.
Email Post