To the Printing Press 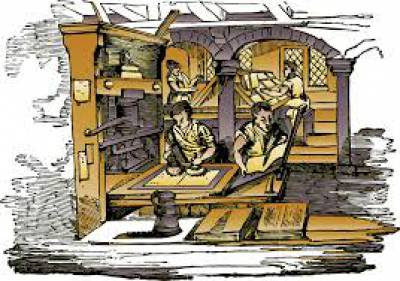 One of the biggest decisions that comes in the life of a self-published author is whether to go for a print edition or not. Now this one aspect is what makes lot of people chase the coat tails of publishers because they want to see themselves in print. Despite all the popularity of e-books a book does not feel real unless it is a paperback you can touch and feel, stain it with coffee marks, dog ear it and leave marks of your existence behind on it. A legacy that you can pass on to the next reader who borrows from you and doesn’t return or to the one who picks it up from the second-hand book store where the book reaches from you. Each printed book has an interesting life of its own undertaking a journey carrying your story from person to person. A e-book lacks that. But then a paperback doesn’t come free. Who will invest money in getting the damn thing printed? If it was one or two ,the author would himself be glad to shell out the dough. But when minimum quantity required runs in hundreds and thousands, that intimidates the writer.

Publishing on demand came as a solution to this problem faced by self-publishing authors. But that had its own issues. The per book cost became so high that it could not even imagine competing with the paperbacks put up by the traditional publishers. Who would buy a book by a new author paying 400-500 bucks when you can get the ones by your favorite authors for 100-200. Still it is good option to get yourself a copy of a book as souvenir and just for namesake claim there is a paperback version of your book. So I decided to give it a try. Options in India were Pothi and Cinnamon Teal. For other markets, there was CreateSpace. But all this looked complicated and I was daunted by the intimidating task of going through this process.

However as I was putting up my e-book for pre-order on KDP direct, an option came up for putting a paperback as well. I went through the process as given in the instructions. It did take lots of time but finally the book was all ready to be printed. But then the KDP Print option was not open to India yet. So I could put up for print but getting even a single copy for myself would be beyond my reach with the charges for shipping from US. So I decided to try the local ones. I was feeling much more confident about the procedure of putting up a book for print on a self-publishing platform having already done it once. So I created an account on Pothi and got started. After a lot of effort, book was all ready for print. For a small amount of money, I could get myself a proof copy of the book. And so here I was - ordering the first print copy of my debut book. The book arrived in 2 days and looked quite decent. I was quite happy with it but on closer examination I found some of the formatting was off. And the price definitely was prohibitive for readers.

Meanwhile one of my writing associates told me about a local book selling platform who had an associated printer who could do it much cheaper than Pothi. But again, there was a catch – it wouldn’t be a true print on demand – I would have to invest in a small inventory – 50-100 books. Meanwhile I heard of an offset printer as well who may be willing to print in small quantities. The first printer was in a city far away from me while second one was in a city nearer to me. However, both printers would not be managing the shipping of books for me. With the person in the far-off city, I had this selling platform guy who would host the book on his platform and manage the sales and logistics. And he would also take care of shipping my author copies to me. So that seemed a safer option for a beginner.

Meanwhile I tried to find out what options I would have with the other printer through other self-published authors. I came to know you could register as a seller on Amazon and sell there and also avail the Amazon fulfilled facility wherein Amazon will manage the warehousing and shipping themselves. This option I came to know was prohibitively expensive forcing me to either hike the price to the level of pothis option or have no margin or royalty for myself. Doing the logistics myself seemed to much of a pain what with a full time job and a family. So, I decided to skip the amazon option for time being and go with this selling platform and his associated printer.

The platform owner gave me the details of printer and there was quite a bit of to and fro with the printer and the cover designer before getting it right. That way it is very critical to have a cooperative and accessible designer or an experienced one who knows exactly what the printer wants and gives it right the first time. Then there was discussion on cost, margins and price between myself, the selling platform owner and the printer. Finally, everything was fixed and orders given out.

Books started reaching customers before my author copies started reaching me. But generally, feedback was good and I was reassured. Still my mind was not fully at rest till my copies arrived. And then began the sales. But lot of people were asking why the books were not amazon and I had to keep redirecting them to the portal where the book was on sale. However people did register and did buy the book there as well.

Next some people were asking for print copies in US. After a bit of thought I decided to do that as well. I wrote to Amazon customer service inquiring if I went for KDP select for e-book, their direct printing option wherever available and my own printing in India, would it be a terms violation. They replied in the negative and said I can go ahead. So, I immediately set up the book of KDP print as well and launched the paperback abroad as well. There is still a bit of anticipation as I have not seen how those have come out. There I had to go for a different size and also not use the back cover I used in India. I also had to use Amazon’s cover designer to design the spine and back cover. However, one reader has ordered from US and she has sent pictures. So far it looks encouraging. Have to see if she finds the entire book all right. If so, I am done.

One last thing I am planning when most sales are done is to put it on Amazon to be dispatched by me. Will keep some minimum inventory with me so that always book is available and I can process on and off tail end orders. One of the requirements for this is a ISBN code. I asked people and found out it can be obtained for free by applying on a certain site maintained by a government department. I did that as well and now have a ISBN for paperback to be put from the second print batch onwards. Once that print is done and I put it on Amazon, the manufacture and logistics journey will kind of come to a finish.