Dragon Riders of Pern - a Fantasy as well as Science Fiction 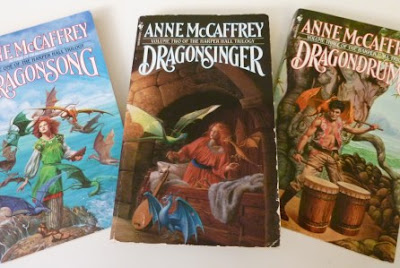 How do you differentiate between science fiction and fantasy? If there be dragons, it is fantasy. If there be space ships, then it is science fiction. Simple, eh? What if the story has both spaceships and dragons. What do you call such stories? Well that’s Anne McCaffrey’s Pern series for you. It is a tale of strange land where toxic spores called ‘threads’ keep falling from the skies whenever a neighboring planet passes close by. There is only one way to destroy these ‘threads’ before they fall to the ground and destroys the land and the people – dragon fire. So, we have the knights - riding dragons instead of horses to shoot down these 'threads' in mid-air. In the land, we have a medieval feudal society complete with castles and barons. A typical fantasy setting, isn’t it? Well, not exactly. The dragons are alien sentient beings who are able to breathe fire by chewing phosphoric rocks. The riders are able to ride them by establishing a telepathic link with them. The people are basically people from earth who migrated on space ships when earth was becoming inhabitable due to radioactivity. As people establishing fresh civilization on a new land, they end up creating a medieval feudal society. Sounding more like science fiction now, doesn’t it?

The series has numerous stories in these settings where characters often reappear in stories set in the same timeline or as historic figures when stories are set in a different time frame. The stories are all human stories of interaction between people, their aspirations, their conflict of interests, of clashing personalities and ideologies – all things that happen in our current world. But all this is played out in the alien settings of the world of Pern filling the reader’s mind with wonder. Disasters that face our earth might be global warming, climatic changes etc. In this world it is those 'threads'. Like in our current world there is a bigger threat starring humanity in the face and petty internal squabbles are preventing any joint response to the danger on behalf of humanity thus putting entire humanity's existence at risk.

So what all does this series have for the reader. For a regular fiction reader – action, drama, romance, friendship, enmity, coming of age – all of it is out there across various books of the series. Most books are complete in themselves and you don’t need to read them in order or need to commit to reading all of them just because you read one of them. For the fantasy reader, there is a completely new world to be discovered out there. You don’t discover all of it in one book. You discover it in pieces over the various books in the series like how you discover the real world as you live through it. Whenever you are curious, you can delve into this world and satisfy your curiosity while enjoying a good tale. There is no grand conflict and you are not left hanging on a cliff. As a science fiction reader, you have things explained, all magical things are given a scientific basis. For instance, the dragons are supposed to be genetically mutated from the native telepathic lizards. There is a sociology angle and grand sweep of events in the traditional of Asimov, Herbert, Dickson et al. In certain ways it has best of both worlds. Read individually each book has that tiny exploration of slices of people’s life at a local place and time – the people, their dreams, fears, aspirations etc. Read as a series, there is this broad flow of historic events and the ‘bigger picture’ at a ‘global’ level as one would call it.

From a social perspective, this series has a feminist angle. The most powerful dragon is the golden queen. And dragons bond with humans of same gender. So, women are the most powerful persons as riders of the golden queens. Various other themes appear in various individual books. Overall it is a very easy read and one of the high recommended books for a non-reader of science fiction and fantasy genre looking to get into this genre.
Email Post