Dune - a  20th Century Epic of the Distant Future 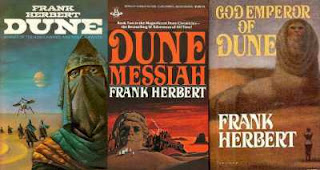 As far as good writing goes, usually the devil is in the details. When writing about the present, many authors usually try to draw from personal experience. Some authors go to length to experience really dangerous and awkward situations to be able to depict them accurately in their stories. That can be a challenge but it is not impossible. Things get tougher when writing about the past. Here one can't rely on personal experiences unless some day time travel becomes a reality. So the writer has to depend on second hand information. He has to pore over numerous accounts regarding the period of time he is covering in his story to get a mental image of how things would have been in those times. Wherever details are not there, he has to fill up the gaps with consistent assumptions. Now how about the future? That too not the near future but really distant future!  READ MORE

Foundation - A Political History of the Distant Future 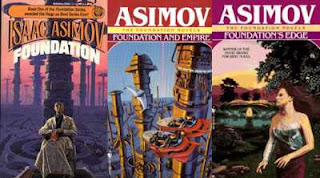 I heard the word science fiction sometime when I was in school. It sounded cool and jazzy. But kind of scary too! I had already read Jeffrey Archer and Agatha Christie while I was still at primary school. So I was not new to adult books. But I felt science fiction would be too tough for me and was reluctant to go anywhere near it. I did try one of the books from Rama series by Arthur C Clarke. But somehow I could not connect with that story and did not proceed far with it. I am sure there are many an avid reader out there who have had similar experiences with this genre.

I was in college when I finally took the plunge. Science fiction was supposed to be the cool thing that the intellectual elites at college used to read. I of course did not belong with them but I was attracted to the things they did and spoke of.  READ MORE 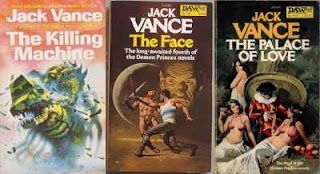 A boy sees his family getting killed by villains. Then there is a gap in the story to allow the boy to grow up. And then – Lo Behold! We have the hero of the story – now an angry young man all set to seek vengeance. The villains themselves have grown from strength to strength in the intervening years and are no push overs. Now is the time to grab some popcorn and lean back on the recliner as the hero and the villains cross swords. And in between bring in some pretty young things and throw in some romance as well. Now we have it all – the sure shot recipe for a Bollywood blockbuster. But doesn’t sound the likeliest of stories to hit it off with science fiction buffs, does it? Believe it or not – that is exactly what Jack Vance has managed to do with his demon prince series. And how! READ MORE

Childe Cycle - Bridging the Past and the Future 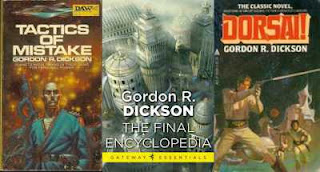 One of the biggest contributors to my development of reading tastes was my college hostel library. Here is where I picked up my first Asimov; here is where I picked up my first Herbert; here is where I picked my first Dickson. There was just one book of Gordon Dickson though: ‘Tactics of Mistake’. I found the book quite fascinating: the story flowed like a game of chess as the hero Cletus Graham formulates his theories on war and goes about executing it. In some ways, the book was like seeing Sun Tzu’s art of war in action. Of course the author has his own theories which I might take liberty to say I found as ingenious and logically sound as Sun Tzu’s. Then I did not find another book by this author for close to thirteen years till I ran into a fellow science fiction fan, who mentioned this author as one of his favorites. READ MORE 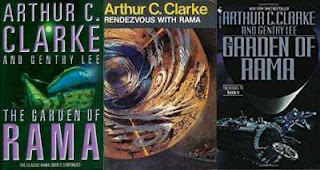 Rama series is not strictly typical Arthur C Clarke. The first book ‘Rendezvous with Rama’ is written entirely by Clarke and can be considered classic Clarke. The other three books in the series were written in collaboration with Gentry Lee. So they are quite different. READ MORE

Hitchhiker's Guide to the Galaxy - a Totally Crazy Ride

Douglas Adams is one author after mine own heart. Something totally different from any other series I have read:  a science fiction spoof. It is cult classic and complete laughing riot. I am sure this series will be familiar to everyone: it is the “Hitchhiker’s Guide to the Galaxy Series” by Douglas Adams. What started as a weekly series on radio became a series of books. This series impressed me so much that I quote from it lot of my writings. No other author has had this kind of impact upon me.


This series is one science fiction series that has probably spawned the largest number of quotes. Even the title of each one of the books is so memorable that they have become catch phrases: “Restaurant at the End of the Universe’, “Life, the Universe and Everything”, “So Long and Thank you for all the Fish” and “Mostly Harmless”. It is also filled with a whole lot of interesting concepts that are so wildly imaginative that they can induce laughter but at the same time if you think about them they make lot of sense. Both as a science fiction concept and from a philosophical standpoint. READ MORE 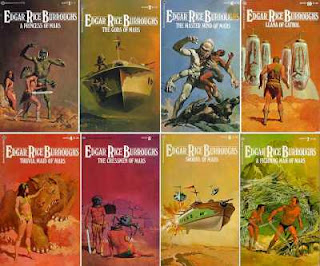 Dragon Riders of Pern - A Fantasy as well as Science Fiction 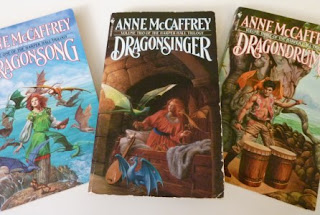 How do you differentiate between science fiction and fantasy? If there be dragons, it is fantasy. If there be space ships, then it is science fiction. Simple, eh? What if the story has both spaceships and dragons. What do you call such stories? Well that’s Anne McCaffrey’s Pern series for you. It is a tale of strange land where toxic spores called ‘threads’ keep falling from the skies whenever a neighboring planet passes close by. There is only one way to destroy these ‘threads’ before they fall to the ground and destroys the land and the people – dragon fire. So, we have the knights - riding dragons instead of horses to shoot down these 'threads' in mid-air. In the land, we have a medieval feudal society complete with castles and barons. A typical fantasy setting, isn’t it? Well, not exactly. The dragons are alien sentient beings who are able to breathe fire by chewing phosphoric rocks. The riders are able to ride them by establishing a telepathic link with them. READ MORE 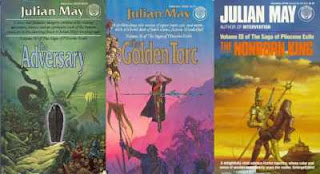 Every culture has myths of Gods with their magical powers interacting with men. Human faith started with animalism with ideas of totem animals and nature worship. The sun, the planets, the forests, the rivers were all supposed to have a Godly aspect to them. Slowly the Gods of nature began to acquire human attributes but with supernatural powers. Like say Zeus, Thor and Indra, the Gods of thunder and lightning. And a host of other beings came into existence – magical beings that were not really Gods. These were the faerie in Celtic myths, centaurs, dryads, nymphs in Greek myths, Yaskshas, Gandharvas, Nagas in Hindu myth and so on. And a whole set of stories emerged around the interaction of humans, Gods and magical races. Many of the modern fantasy are derived from one or the other of these myths. Now this is the more pragmatic, prosaic view of myths. Now one can instead take a romantic view and ask what if all these stories we read in myths had actually happened? READ MORE

Ender - the series - a study of inter species relations 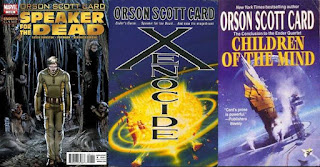 Orson Scott Card is one of the most controversial as well as most perceptive science fiction writers. Many have marveled at how a person who reveals so much sensitivity in his stories, could hold such deep prejudices. He is castigated especially for his opinion against gay marriage and other strong conservative views. But I must say one is seriously missing something if one doesn’t read his stories due to his views. One bemoans the lack of right wing intellectualism – and here he is, and we want to ban him. Understanding conservatism itself is a tricky exercise for it is based on beliefs. So only a true believer can understand how it feels to be a conservative. And this creates a paradox – if you are a believer, how can you have an intellectual, questioning mind that refuses to take anything for granted and challenges everything? READ MORE 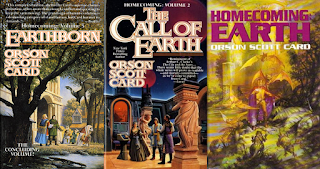 What if Gods were powerful aliens? That is the theme of Star Gate. What if God is a super intelligent computer? That is the theme of Orson Scot Card’s Homecoming. The story starts on a modern planet in the future where society is developed with women being the rulers. There everything begins to collapse, and the main characters have to return to earth which is the homecoming referred to in the series. This is both to escape destruction of their world and quest to unite the computer called over soul that governs the planet with its counterpart on earth ‘The Keeper’. This is probably some obscure allegory of the journey of the soul to become one with its maker. READ MORE 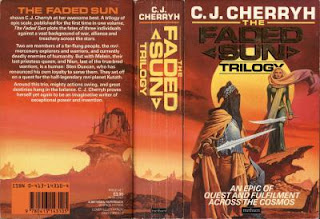 Science Fiction has four or five broad themes – sociology of an intergalactic human society many eons into the future, technological advancement and its impact few years into the future, time travel and encounter with alien species. The encounter will alien species was probably the earliest attempted science fiction and it soon became very cliched. Bug eyed monsters, skeletal or reptilian beings – human like when shown at close quarters or not shown in close quarters at all but as a distant force of nature who relentless pursues enslavement or destruction of the human race. Given that authors who can write interesting alien encounter stories are such a rare species, C J Cherry is one to be highly cherished belonging to this rare breed.READ MORE

Have you were wished for a book that has Asimov’s stories stretching across millennia and crises facing humanity to be solved like puzzles, Clarke’s detailing of mechanism of futuristic space crafts and equipment, Orson Scott Card’s ethical dilemmas faced by leaders – justification of evil and harm to certain sentient beings for greater good of humanity versus endangering entire humanity for sake of principles and last but not the least H G Wells’ use of ideas from science and dark outlook for humanity? If so, you have a Chinese Science Fiction author who gives you just that – Cixin Liu’s Remembrance of Earth's Past trilogy. Whoever says Chinese lacks imagination should read this series. And he is no Chinese American. He is a proper Chinese living in China, who has written the series in Chinese - the ones I read are English translations. READ MORE
Email Post