The Mystery of the Missing Earrings 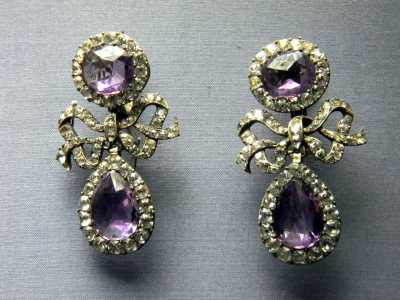 Have you read “Mystery of the Silver Spider"? No? You must. It is part of the “The Three Investigators” series, a series created by Robert Arden. The main character are three American boys Bob, Jupiter and Pete who solve crime. So, in this story “Mystery of the Silver Spider”, the main characters are involved in political intrigue happening in a small European Kingdom. Somehow this plot of royal kidnapping, usurpation of throne etc. seems to be a popular one with children’s writers. I can name at least four others – Circus of Adventures by Enid Blyton, The Secret of Spiggy Holes again by Enid Blyton, A Princess at Chalet School by Elinor Brent Dyer and Eva Ibbotson’s Dragon Fly Pool. Coming back to the three investigators story, the silver spider is a royal artifact that gives the king the authority to rule. So, the conspirators want to get hold of it while kidnapping the prince and forcing him to sign an abdication. Bob hides it somewhere when the abduction attempt is made but hits his head and forgets where he hid it. So, the whole story is about trying to find out where Bob hid the spider.

So what does that story have to do with me? We had a similar story at our home when I was 7. We had just returned from my uncle’s wedding and we discovered my mother’s diamond earrings were gone. Searching for it in the house was like searching for a needle in a haystack. You may ask what is the big deal. You didn’t live in a palace, did you? It is not the size that matters. Now a meadow is bigger than a haystack, but no one says like looking for a needle in a meadow, do they? That was the case with our house. The house itself was small. But it was jam packed with so many things big and small. The earrings could be anywhere among these things. But why will an earring be anywhere? Jewels usually are in the safe, aren’t they? Now you ask such questions because you don’t know my father.

My father was someone who took the whole idea of paranoia to a different level. So, when we were leaving for the uncle’s wedding, he imagined we would definitely be burgled. And the first place the thieves would look for valuables? Of course, the safe. So that was exactly where we should not leave our valuables. Instead he left the valuables in various hidey holes within the house. That is how some of the jewels landed in the kerosene chamber of our stove. Important papers such as share certificates were kept along with the newspapers. The safe as such was left empty for the thieves to burst and be disappointed. All this was fine. Except for the fact that the diamond earrings had gone missing and father could not remember where he had kept them.

As we sat thinking, brainstorming about various places, it could be, one of the ideas that came up was the match box in the kitchen. But that very day, mother had thrown it into the dustbin. The dustbin was emptied but there was no match box. The dustbin had already been emptied in the big dustbin at the end of the street. Soon our neighbors were greeted by the funny sight of my parents reprising the roles of rag pickers, digging all about the dustbin. I wish like in some movies, someone had revealed to the neighbors what we were looking for. Then possibly the whole neighborhood would have been down at the dustbin with my parents. Anyways it was only my parents who dug around the dustbin and came back to the house smelling of garbage. But no diamond earrings. They had to take a bath and change clothes. Finally, they resigned themselves to the fact that the earrings were gone for good. Maybe the maid servant had managed to get to wherever father had hidden them before any of us could. But we had no basis to accuse her. And we still did not know where the place may be.

That night as we were about to go to sleep, my father was seen fiddling with the pillow. Soon the seams were ripped out and cotton began to fly. I wondered if the shock of losing such a valuable earring had had a drastic impact on my father’s sanity. His hand was fully inside the cotton in the pillow and fiddling around. My mother and I watched him curiously. Then suddenly an Eureka expression came on his face.

“What?” asked my mother.

His hands emerged out of the pillow. And he displayed his hands proudly as if showing a winning hand in poker. Indeed, it was a winning hand for it held….my mother’s diamond earrings.

That is where my father had hidden them - inside the stuffing of the pillow. I am sure no thief would have thought of that. Nor could my father himself till finally his memory came back to him. I wonder what if he had not managed to remember and it had got discarded with trash in the due course of years. Someone handling the trash would have hit a windfall.
Email Post